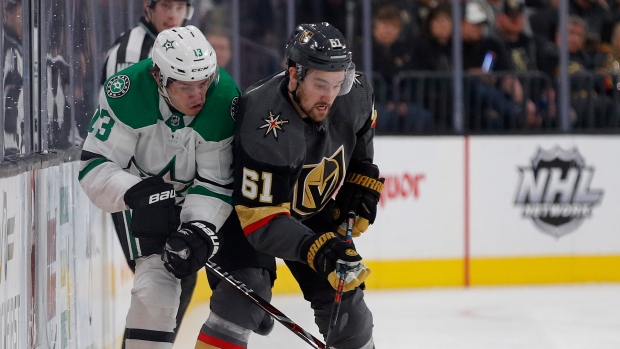 Newly acquired forward Mark Stone is expected to sign an eight-year contract extension with the Vegas Golden Knights on Friday, and according to Don Brennan of Postmedia, the deal will include a full no-movement clause.

TSN Hockey Insider Bob McKenzie reported Monday that Stone had agreed to the deal worth $9.5 million annually, the final step in the Golden Knights trading Erik Brannstrom, Oscar Lindberg and a second-round pick to the Ottawa Senators to acquire him.

Brennan adds that "there's talk" the Senators did not offer a full no-move clause to Stone in their negotiations and notes that he will earn $12.5 million more on the $76 million deal playing in Nevada than he would have playing in Ottawa due to taxes.

Stone, who had spent his entire seven-year career with the Senators prior to the trade, made his Golden Knights debut on Tuesday, posting a plus-1 rating in 17:04 of ice time.

He took to Twitter on Wednesday to thank the Senators and their fan base.

"I came to Ottawa a boy and leave a man," the 26-year-old Winnipeg native said. "I am so grateful for all that helped guide me, teach me and support me.

"I wish the Sens the greatest of success in the future. There are awesome people on and around the team, and the team will rise again."

Stone is currently playing out a one-year, $7.35 million contract signed with the Senators last season.