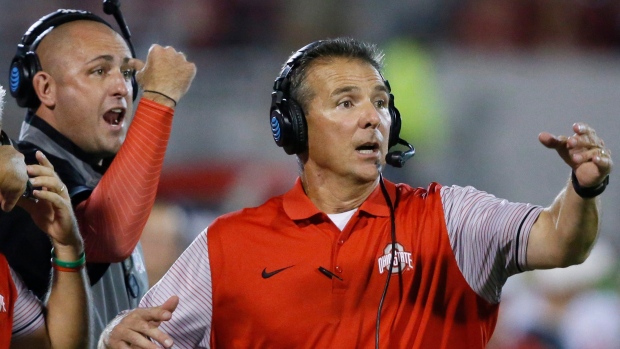 Could the Texas Longhorns be primed to hand over the keys to the program to a coaching legend?

The Athletic's Bruce Feldman reports that Texas is prepared to move on from Tom Herman and offer the head coaching job to three-time National Champion Urban Meyer.

But that appointment is far from a fait accompli.

While Herman's future, in the midst of his fourth season on the job since his move from Houston, is very much up in the air, landing Meyer could prove to be difficult. The former Ohio State and Florida coach is currently an analyst with Fox Sports and Feldman notes that the 56-year-old Meyer, who left the Buckeyes after the 2018 season citing health concerns, is enjoying his role.

Herman's job with the Longhorns is becoming increasingly precarious with yet another loss on Friday - this time against Iowa State - that dropped Texas to 4-3 on the season. Over his Texas tenure, Herman has a 30-18 mark. Texas has not reached a Big 12 title game since 2009, now in the midst of the program's longest streak of futility since the formation of the conference in 1996.

Among the other names in contention for a potential Texas opening include Cyclones head coach Matt Campbell, who is currently in his fourth season at Ames, and has the team atop the Big 12 at 7-2.