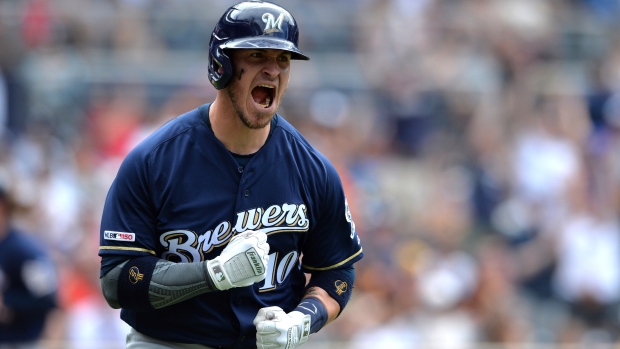 The Toronto Blue Jays are among the teams that have met with free-agent catcher Yasmani Grandal according to ESPN’s Marly Rivera.

It’s unclear how many teams the Blue Jays are competing against on the Grandal front, but Jon Heyman of MLB Network reported Tuesday that the Milwaukee Brewers want to bring him back for another season. Bobby Nightengale of the Cincinnati Enquirer reported last week that “all signs point” to the Cincinnati Reds making a “serious run” at the switch-hitting catcher.

Prior to spending last season with the Brewers, Grandal played four years with the Dodgers and three with the San Diego Padres. He was named to the National League all-star team last year as well as in 2015.

The Jays are no stranger to making big splashes in free agency behind the dish, signing Canadian Russell Martin to a five-year, $82 million deal prior to the start of the 2015 season. Martin went on to play a crucial role in the Jays playoff runs of 2015 and 2016 before he was traded to the Los Angeles Dodgers last off-season.

The Blue Jays went with a trio of Danny Jansen, Luke Maile and Reese McGuire behind the plate last season but didn’t get consistent production from any of the three from both sides of the plate. McGuire finished the year with a nifty .299/.346/.526 slash line but saw his OPS drop considerably when facing left-handed pitching (.924 against righties, .685 against lefties). Despite 13 home runs from Jansen, neither he (.207), nor Luke Maile (.151) was much of a factor at the plate.

While Grandal is without question one of baseball’s best catchers, general manager Ross Atkins made it clear earlier this week at the GM Meetings that the Jays are prioritizing pitching this off-season.

“First and foremost, for us, we want to make sure we address every pitching need, every pitching opportunity and consider that before we lunge at the positon player market. Pitching could impact our financial flexibility.”

The Jays finished last season at 67-95 in 2019 to miss the playoffs for the third straight season.