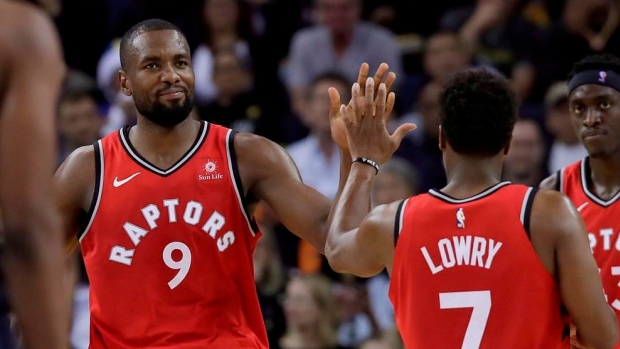 If the NBA does resume its 2019-20 season, a few teams might have to get creative with how they handle their training camps.

According to ESPN's Adrian Wojnarowski, executives of teams in marketplaces where government restrictions are keeping practice facilities closed asked the NBA whether players can report directly to the league's "proposed campus environment" for the start of training camps if a resumption in play happens this summer.

ESPN Sources: Some franchises in restricted markets -- including NYC, Boston, Toronto -- are inquiring to NBA on option for players to bypass returns to those cities in June and report directly to proposed bubbles for eventual start of training camps. https://t.co/KxLrRIzh6V

Wojnarowski reports the Toronto Raptors, along with the Boston Celtics and New York Knicks, were among the teams on Thursday's general managers call with the league office who expressed concern that local government restrictions make it difficult to prepare for the potential restart of the season. The NBA has reportedly told those teams it will work with them on solutions to facilitate training camps.

Wojnarowski adds that many teams in locations still adhering to heavy coronavirus restrictions may have difficulty getting players who left at the time of the league's shutdown back because of extended self-quarantine measures in place that may last up to 14 days. It's also possible that players may have to quarantine again should the league proceed to a bubble site for the resumption of play. Wojnarowski also reports that the league not releasing a concrete return to play proposal is making it hard for teams to plan accordingly.

Wojnarowski writes that several teams in the Eastern Conference have considered setting up temporary training camps at stops before arriving at Walt Disney World in Orlando, where many believe teams in the East will be stationed if the league decides to go that route. However, it's unclear if all 30 teams would be required to return to play out the regular season or just those in playoff contention, further complicating matters for teams near the bottom of the standings.

The league has a Board of Governors call next Friday where it is expected to provide more clarity to teams.

The league paused its season on March 11 once Rudy Gobert of the Utah Jazz was revealed to have tested positive for COVID-19.