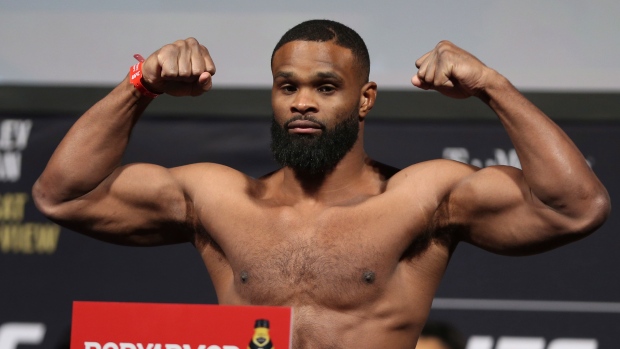 Former UFC welterweight champion Tyron Woodley has not been in the Octagon since he dropped the belt to Kamaru Usman at UFC 235, according to Brett Okamoto of ESPN, he will face Leon Edwards in the main event of Fight Night London on March 21.

BREAKING: Leon Edwards (@Leon_edwardsmma) vs Tyron Woodley (@TWooodley) is on as the headliner of UFC London, per Dana White. ELITE 170-pound matchup. pic.twitter.com/KrSvPfWZ1s

Woodley was scheduled to face Robbie Lawler last June, but was forced out of the fight with a hand injury.

The 37-year-old successfully retained the welterweight belt four times, including three victories and a draw before falling to Usman last March.

Woodley fought to a majority draw against Stephen Thompson in his first defence, before defeating the challenger via majority decision in their rematch.  He also defended the title against Demian Maia and Darren Till during his time as champion.

The Ferguson, Missouri native is 19-4-1 over the course of his professional MMA career.

Edwards enters the fight on an eight-fight winning streak as he tries to fight his way into a title shot.  The 28-year-old beat former lightweight champion Rafael dos Anjos at Fight Night San Antonio in his last outing last July.