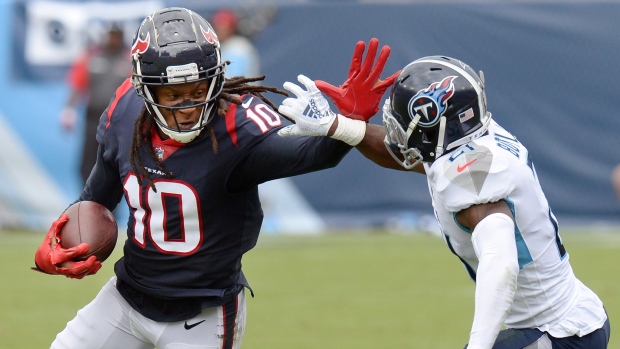 The Arizona Cardinals have added one of the NFL's top receivers to join an intriguing young team aiming to make a big move in the NFC West.

The Cardinals acquired three-time All-Pro receiver DeAndre Hopkins in a trade that will send running back David Johnson to the Houston Texans, a person familiar with the situation told The Associated Press. The person spoke to the AP on condition of anonymity Monday because the trade hasn't been officially announced. The NFL's business year begins Wednesday, when the trade can be completed.

The 27-year-old Hopkins gives the Cardinals a premier receiver to add to a promising core on offence, which includes second-year quarterback Kyler Murray, receivers Christian Kirk and Larry Fitzgerald, and potentially running back Kenyan Drake, to whom Arizona gave the transition tag earlier Monday.

The Cardinals finished with a 5-10-1 record last season under first-year coach Kliff Kingsbury, who is known for his innovative offence. Murray was the No. 1 overall draft pick and had an encouraging rookie season, finishing with 3,722 yards passing and 20 touchdowns. But the Cardinals occasionally struggled to stretch the field for big plays in the passing game. Hopkins' arrival should help.

Hopkins has three years remaining on a five-year, $81 million deal he signed in 2017. The 6-foot-1, 212-pound veteran has been one of the most consistent receivers in the NFL over the past seven years, topping 1,000 yards receiving in five of seven seasons. He caught 104 passes for 1,165 yards and seven touchdowns last year.

Houston loses a receiver who is in the prime of his career and a top option for young quarterback Deshaun Watson. The durable Hopkins has played his entire seven-year career with the Texans and only missed two games. The Texans won the AFC South with a 10-6 record last year and advanced to the divisional playoff round before losing to the Kansas City Chiefs, who eventually won the Super Bowl.

The 28-year-old Johnson was an All-Pro with the Cardinals in 2016 during his second season but hasn't been able to match those numbers in the past three years. He battled injuries for much of 2019 and finished with 345 yards rushing and 370 yards receiving. By the end of the season, he had lost a chunk of his playing time to Drake and Chase Edmonds.

Johnson reacted to the news by putting “ LETS GO HOUSTON!!! See you soon ” on social media.

Johnson has two years remaining on a three-year, $39 million extension he signed in 2018.