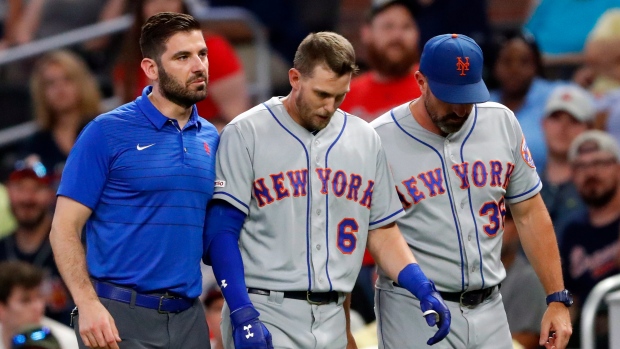 The New York Mets are breathing a sigh of relief

MLB.com's Anthony DiComo reports that an MRI on the injured left hamstring of All-Star outfielder Jeff McNeil revealed only a mild strain

Source: Jeff McNeil's MRI revealed only a mild left hamstring strain. The expectation is he will be able to return the Mets in 10 days.

McNeil is still expected to be placed on the 10-day injured list with Ruben Tejada rejoining the team from Triple-A Syracuse. No official announcement has been made.

With the Mets down two in the ninth inning of Tuesday night's game, McNeil grounded one to the left side and came up limping after being called out at first. He walked gingerly back to the dugout with the help of the training staff appearing to favour his left leg. The Mets would go on to fall 5-3 to the division-leading Braves.

After the game, McNeil told reporters the injury "wasn't terrible, just a little snag," adding that he did not feel anything pop.

"It didn't feel great, but I don't think it's terrible," McNeil said. "We'll see what it feels like in the morning."

Prior to his exit, McNeil was 1-for-5 with an RBI. His batting average stands at .332 entering play Tuesday.

After winning 14 of 15 games, the Mets have dropped two in a row and now sit two games back of the St. Louis Cardinals for the second National League wild card spot.