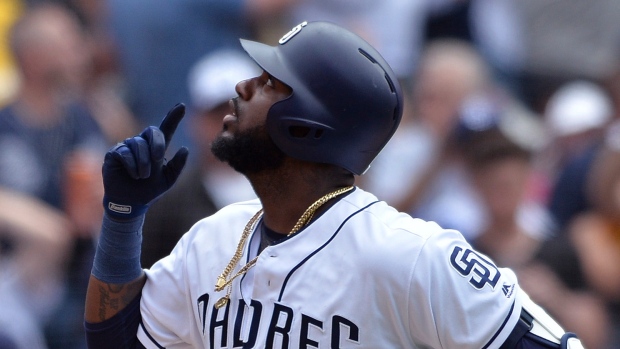 SAN DIEGO — Franmil Reyes hit a go-ahead, three-run homer in the seventh and Eric Hosmer added a two-run shot for the San Diego Padres, who overcame three homers by the Milwaukee Brewers in an 8-7 win Wednesday for a three-game sweep.

Yasmani Grandal had given the Brewers an 8-5 lead in the top of the inning on a three-run homer against his former team, his 16th.

Christian Yelich hit his MLB-leading 27th homer and Ryan Braun homered, doubled and drove in three runs for the Brewers.

Craig Stammen got into and out of trouble in the ninth for his third save. He allowed Yelich's single and a walk to Braun with one out before getting Grandal to force Yelich at third. Grandal was safe when first baseman Hosmer dropped a throw from Manny Machado. Stammen struck out Hernan Perez to end it.

Machado missed a three-run homer by inches, settling for an RBI single in an odd play in the second for the Padres, who won their fourth straight.

San Diego took a 5-3 lead in the third on Greg Garcia's triple and Manuel Margot's single, but Milwaukee came back on Yelich's no-doubter, his MLB-leading 27th, off Matt Strahm in the fifth and then Grandal's shot during a bullpen implosion. Brad Wieck allowed singles by pinch-hitter Ben Gamel and Lorenzo Cain opening the seventh before Gerardo Reyes (4-0) allowed Grandal's shot with two outs.

Machado's flyball bounced off the top of the fence in left-centre and back onto the field with one out in the second. The umpires never signalled home run, but the Padres scoreboard operators blew a ship horn that denotes a homer and Hosmer, who had been on first, eased into a trot and was tagged before he got to third. He continued on to the plate, perhaps unaware of what was going on. Fernando Tatis Jr. was on third and scored to put the Padres ahead 3-1.

After a review of 2 minutes, 55 seconds, Machado was told to stay at second and Hosmer was confirmed as being out. The official scorer credited Machado with an RBI single since Hosmer was tagged before he got to third.

The Brewers tied it in the third on Braun's two-run double off Strahm. The Padres regained the lead in the bottom of the inning on Garcia's triple and Margot's RBI single.

Yelich homered into the seats in right-centre with two outs in the fifth.

Braun homered with two outs in the first, his 12th.

Hosmer hit a two-run homer in the first, his 11th.

WWE superstar John Cena paid his $1 bet with Padres rookie Logan Allen near the mound just before the game. The two became friends after a chance meeting at a Tampa steakhouse in January 2018. They had a bet whether Allen, acquired by San Diego from Boston in the deal for Craig Kimbrel in 2015, would make it to the majors. Allen won his debut Tuesday night, throwing seven shutout innings.

Padres: Haven't announced a starter for Friday night's opener of a three-game series at Pittsburgh. The Pirates are set to start Joe Musgrove (4-7, 4.87), who beat his hometown Padres 6-4 on May 19 at Petco Park.