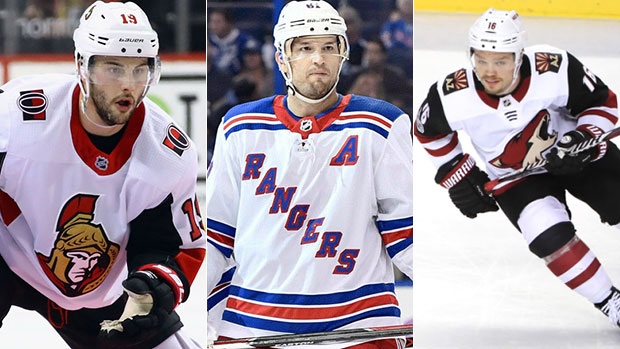 A new name resides atop TSN’s Trade Bait board for the first time in 2018.

Rick Nash has knocked Buffalo’s Evander Kane out of the top spot, with considerable interest building in the New York Rangers winger. More than 10 teams have reportedly inquired about Nash since the Rangers relayed their rebuilding message to the hockey world last week.

Kane fell to No. 6 on the board. Not only has GM Jason Botterill’s asking price remained consistently high for Kane, he has also gone cold. Since debuting at No. 1 in early January, Kane has just two goals and three points in 15 games.

Brassard debuts at No. 4 after not residing in the Top 40 last week.

How does one player make such a drastic jump?

The Senators were leaning towards not dealing Brassard. He was at one point considered least likely to be moved among other forwards Mike Hoffman, Zack Smith and Jean-Gabriel Pageau.

But the Senators perhaps see an opportunity with Brassard being the premier centre available in a thin market down the middle. Before Brassard, the top-ranked centre was versatile Edmonton Oiler Mark Letestu, who now checks in at No. 8 and is likely to be on the move before the Feb. 26 deadline.

Ryan joins the list in Phaneuf’s spot - and there is a parallel there. Like Phaneuf, Ryan’s contract has been perceived as unmovable. Ryan, 30, has four years remaining at $7.25 million. If the Sens are willing to get creative and take another bad contract in return - as they did with Marian Gaborik - the potential exists for Ryan to move.

The situation around Domi is much more fluid. The Coyotes aren’t “actively shopping” Domi, but as many as 20 teams are believed to have reached out to gauge his availability during a down season. Domi, 22, has just four goals this year.

Similarly, the Ducks are waffling between buyer and seller. If they decide to sell, Vermette would generate interest as the ninth full-time centre on the list.

At No. 24, Detroit’s Petr Mrazek is the top-ranked goalie on the board. The Philadelphia Flyers recently lost starter Brian Elliott for a period of five-to-six weeks after core muscle surgery. Mrazek is an RFA at the end of the season and the Red Wings are not expected to qualify him at $4 million. That is the exact situation under which Philadelphia rescued and resuscitated Steve Mason’s career from Columbus on Deadline Day in 2013.

The belief is the Red Wings are looking to move one of either Mrazek or Jimmy Howard before the deadline. Howard, 33, has one more season remaining at $5.3 million. A comparable either-or situation exists up front in Detroit. Gustav Nyquist ranks No. 27 on the list, but the Red Wings are also shopping two-time 20-goal scorer Tomas Tatar. The difference is Tatar is in the first season of a four-year, $21.2 million deal.

Pittsburgh defencemen Ian Cole and Minnesota centre Matt Cullen, who both helped the Penguins to two straight Stanley Cups, slid down the list because their recent uptick in play has made them more valuable components during their team’s respective playoff pushes.

St. Louis Blues prospect Jordan Kyrou is one of three prospects on the board – along with Flames netminder Jon Gillies and Jets centre Nic Petan - but Kyrou is largely representative of the Blues’ prospect cupboard. There is an arms race brewing in Central Division, with the Blues, Jets, Predators, Stars and maybe even Wild seeking to add an impact forward. In order to do that, the Blues may well have to part with one of their centre prospects such as Kyrou, Klim Kostin or Tage Thompson. Robert Thomas seems to be the one untouchable there. Teams have also inquired about injured forward Robby Fabbri.

Here is TSN Hockey’s latest Top 40 Trade Bait, whose ranking always seeks to blend likelihood of a trade with prominence of the player: