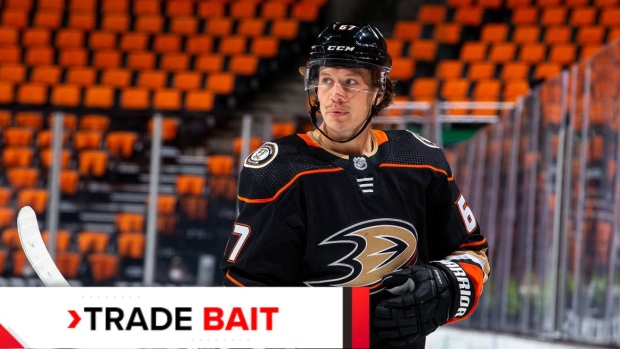 The hottest player in the National Hockey League has hit the TSN Trade Bait board.

Teams have been calling the Anaheim Ducks about Rickard Rakell, who has racked up 12 points in his past six games, and joins the list at No. 3 because GM Bob Murray isn’t hanging up the phone.

Two GMs were asked that question and without getting into specifics, each said, “It’s high.”

Rakell, 27, is a former all-star right winger and two-time 30-goal scorer. More importantly: Rakell has one year left on his deal with a reasonable $3.79 million cap hit – two critical caveats in this flat-cap pandemic world, particularly for teams averse to spending assets on rentals.

So, why would the offensively challenged Ducks (28th in scoring) be willing to listen on Rakell?

If the price is right, one could surmise three reasons:

1. Rakell would easily provide the best return on the roster for a franchise looking to jumpstart the rebuild process.

“I’m not going to sugar-coat anything. Our record is not good enough,” Murray told the Los Angeles Times this week. “And I expected to be better and we’re not and there’s no sugar-coating it.”

2. Moving Rakell would open up a spot for younger players hungry for more opportunity and ice time. Ideally, the Ducks would move out Adam Henrique or Jakob Silfverberg before Rakell, but their contracts are prohibitive – each with three seasons left.

3. Rakell will need a new contract shortly. He will turn 30 at the tail end of the first season of his next deal (2022-23), which doesn’t exactly fit Anaheim’s age scheme (see No. 2), and it will surely command a higher AAV. Moving Rakell now, as opposed to as a rental next season, would increase the return.

DeBrusk raised eyebrows after Bruce Cassidy made him a healthy scratch last game, the result of a disappointing start to the season for the former 20-goal scorer.

Like Rakell, teams are calling, and the return would be similarly high for the proven playoff performer. The Bruins are hoping for a big response from DeBrusk, which would calm trade speculation, and help right the ship for a team with Stanley Cup aspirations that has scuffled (3-5-2) of late.