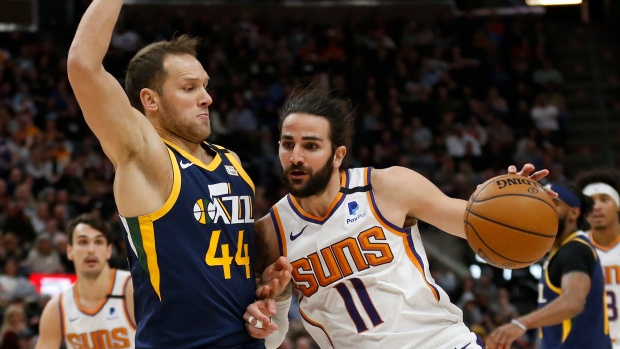 SALT LAKE CITY — Ricky Rubio always felt comfortable in Utah and hated to leave. He made sure his return was noticed.

Rubio had 22 points, 11 assists and seven steals to lead the Phoenix Suns to a 131-111 victory over the reeling Jazz on Monday night.

“I know their game and I played with them for a long time,” Rubio said, acknowledging he often knew where the Jazz wanted to go with their motion and their passes and stepped into the passing lanes.

In his first game back in Salt Lake City after playing for the Jazz for two seasons, Rubio led an offence that shot 56% and seemed a step ahead of the Jazz all night.

“That’s a tough game coming back here to play against your former team with so many emotions going through his mind. He dominated the game,” Phoenix coach Monty Williams said.

Rubio used the All-Star break to get some rest and refocus. He also admitted he got extra juice in playing his former teammates.

“I haven’t felt this fresh all year,” he said. “This was special for me.”

Devin Booker had 24 points and a season-high 10 assists, Kelly Oubre scored 18 while Deandre Ayton added 16 for the Suns.

“We were moving the ball. The ball moves faster than bodies can and we took advantage of that tonight. Ricky and I both had over 10 assists and when you have two people creating like that, we were making the game easy for everyone else,” Booker said.

Donovan Mitchell scored 38 points and Bojan Bogdanovic added 16 for Utah. The Jazz made a season-high 37 free throws -- on 43 attempts -- but looked disjointed while committing 19 turnovers.

The Suns made three 3-pointers in a row to get some breathing room, and then Jevon Carter made a layup and Oubre dunked to take a 99-88 lead into the fourth quarter.

"That third quarter used to be lethal for us. That used to be a thing where we come out and that's where we'd make our push. The roles have reversed," Mitchell said.

Oubre dunked over Rudy Gobert early in the fourth quarter and let him know all about it, drawing a technical foul.

“We didn’t get complacent. Once we got the lead, we kept building on it and we haven’t done that a lot this year,” Booker said.

Rubio made an off-balance 3-pointer from the corner that brought audible gasps from the Utah crowd. The knock on Rubio in Utah was that he wasn't enough of a perimeter threat to keep defences from sagging.

“It was an emotional game for him. To come out and play aggressive and play the right way is exciting for him. I know how badly he wanted this one,” Booker said.

The Suns made their first five shots and set the tone early that if the Jazz weren't going to stop their drives, they were headed for a big night. The Suns outscored the Jazz in the paint 66-42.

"It's all defence. It doesn't matter how many points you score if you can't guard anybody. We gotta go out there and do it -- myself included. No one is excluded from that,” Mitchell said.

Rubio, who also had six rebounds, had 13 points in the first half as the Suns shot 59.5 per cent and matched the Jazz at 62-62 at the break.

Known for their defence over the past few years, the Jazz suddenly can't stop anyone as they dropped their third straight home game for the first time since early last season.

"We're going to keep getting the same result if we don't focus and execute on the defensive end. This is a group that's done that, but that doesn't matter right now. (What) that should tell us is we're capable — at least on some level. But, right now, that's not who we are,” Utah coach Quin Snyder said.

Booker attended the Kobe Bryant Memorial in Los Angeles earlier Monday and it inspired him.

“All of those people in one building because of that man. It was a very important for all of us. I wouldn’t say closure, because we’re all missing a piece of us for the rest of our lives, but seeing Vanessa speak and seeing the girls there helped a lot of people,” Booker said.

Bryant would tell Booker to be legendary. That’s what will motivate him as his career unfolds.

“When you are out there emulating the same moves, same approach, same mindset that he passed on to us … that sticks with you,” Booker said. “But it’s not just basketball. ‘Be legendary’ is a message for life.”

Suns: Ayton got a technical foul 8:00 before halftime. ... With their 24th win, the Suns have now tied their highest win total in the last five years. ... The Suns had 33 assists and made more baskets (33) in the paint than the Jazz had field goals (32).

Jazz: Former Jazz point guard Deron Williams sat courtside. ... Snyder was hit with a technical with 7:11 left in second quarter. ... Mike Conley, Rubio's replacement at the point, had eights and one assist.