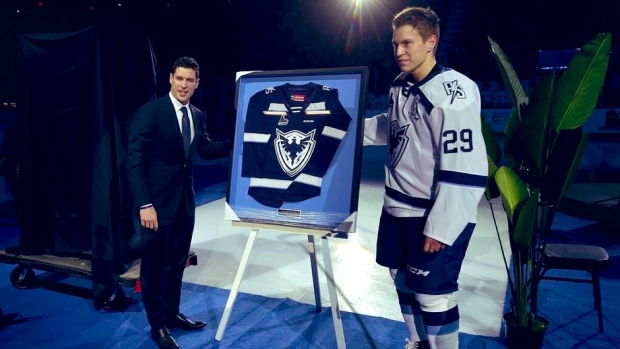 RIMOUSKI, Quebec — They stood and they roared and they didn’t stop, saluting an anglo Maritimer that arrived as a 16-year-old kid named Sid and left for the NHL as a native son.

The hair-raising ovation lasted so long – clocked at 8 minutes and 35 seconds – that the man they were feting, a usually stoic Sidney Crosby, fought back tears.

“When I brought the Cup here in 2017, I had the sunglasses on that day so I could hide it all,” Crosby said of his emotions. “But that’s not the case tonight.”

“Cros-by, Cros-by,” the capacity crowd of 5,062 thundered during a lengthy show of appreciation that drew comparisons to the adulation Habs fans showered on Maurice “Rocket” Richard on the night the curtain closed on the Forum in 1996.

It was that kind of night in Rimouski, one for all-time in junior hockey, as the Oceanic retired Crosby's No. 87.

“Pretty speechless,” Crosby said. “That tells you how special it was to play here. It felt like I was 16 again. I remember the first time I came out in our first home game here and I felt like I did that day. The people here are incredible.”

QMJHL commissioner Gilles Courteau took Crosby by surprise when he announced on the ice during the ceremony that Crosby’s No. 87 would become the first-ever number retired league-wide. Crosby’s number will be taken out of service starting with the 2020-21 season in honour of his contributions to the QMJHL and the sport overall.

Gretzky, of course, is the only NHL player with his number retired league-wide.

“I did not expect that at all,” Crosby said. “I was honoured to have it retired here in Rimouski, that was an honour in itself. I didn’t see that coming.”

Everyone in Rimouski knew Crosby’s return was coming, a momentous night 15 years in the making. It was just a question of when.

Crosby piled up 303 points for the Oceanic in just two seasons, winning just about every award in the QMJHL and Canadian Hockey League in existence.

All of Crosby’s junior hardware, including the QMJHL’s President’s Cup, was on display. Crosby’s led the Oceanic to the President’s Cup in 2004-05, his name engraved on the same trophy that his father, Troy, won in 1984-85 as a netminder with the Verdun Junior Canadiens.

With all of those accomplishments, the Oceanic approached Crosby a number of times over the last decade to retire his number, but Crosby demurred each time. He said either the schedules didn’t line up ­– or he just wasn’t ready.

Crosby, 32, finally felt comfortable to pause from camp with the Pittsburgh Penguins to look back on two years that set him on a path to greatness.

He wanted to share it with those closest to him. Crosby was joined on the ice by his mother Trina, father Troy, sister Taylor and long-time girlfriend Kathy Leutner, along with former teammates, coaches, trainers and equipment managers.

“You start to reflect a little bit and it was a great time in my life,” Crosby said on a night that provided a peek into what it might look like one day in Pittsburgh.

There were a couple classic Crosby stories during the ceremony. Like that his old mates still call him “Darryl,” in reference to Darryl Sittler’s 10-point game, because Crosby had eight points in his first-ever exhibition game with the Oceanic.

Or the tale his coach, Donald Dufresne, told about the time a 17-year-old Crosby went out on his own volition to buy Tim Hortons doughnuts for the Oceanic fans standing outside in the cold waiting in line to buy playoff tickets.

Except, Crosby couldn’t drive then, so he needed a ride from billet roommate and close friend Eric Neilson.

It was Neilson who captivated the crowd with stories of being asked to mentor Crosby, who is two years his junior. Neilson said he was always scheming to break curfew, but it was the younger Crosby who kept him on the straight and narrow – aside from that time they “destroyed” Neilson’s car together.

“Older brothers are supposed to teach you, in life, your life lessons – what to do, what not to do,” Neilson told the crowd. “I can honestly say that man (pointing to Crosby) – still a boy to me – taught me more at age 16 than a lot of people have in my life.”

Before Crosby took to the podium, the Oceanic presented Crosby with his actual dressing room stall – where Crosby said he spent so much of his time talking with teammates who became lifelong friends.

Crosby thanked a number of people by name, before pausing to collect his emotions as he thanked his parents. He reminded the crowd that his decision to play Major Junior was no slam dunk, that he considered college hockey coming out of Shattuck St. Mary’s.

The kid from Cole Harbour, N.S., said he tracked the QMJHL standings daily to see who would end up with the No. 1 pick. Would it be Drummondville or Rimouski?

His parents and agent Pat Brisson went on a visit to Rimouski without him.

“My mom called on the way home and said ‘Sidney, you’re going to love it,’ ” Crosby said. “That was enough for me.”

He then thanked his parents, who were already crying, saying that his time on hockey trips with them were some of his best family memories.

“I’m sure for them as parents, they were sending their kid off to a place that they didn’t know a lot about,” Crosby said. “Seeing what happened, how much I loved it, how much they loved it, what the people did for me here, the way they took me in … They made the right choice.”

Crosby closed by knocking off the rust on his French, thanking all of Rimouski in their native tongue. It was the perfect touch, as usual for Crosby, to cap the perfect night.

And then they roared again.