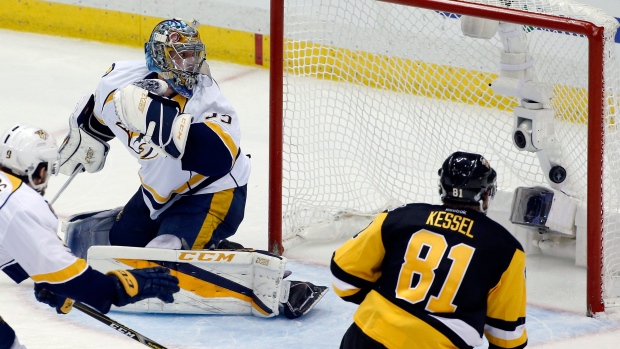 PITTSBURGH — Pekka Rinne was standing there, ready to face the music, the moment the door to the Nashville Predators’ dressing room opened.

Hours earlier, Rinne was standing in the same spot, talking about trying to find a “happy place” as he readied to bounce back from a shaky opening to the biggest series of his life.

What he found instead inside PPG Paints Arena was his own personal hell.

The rock and backbone to the Predators’ first-ever run to the Stanley Cup Final unravelled for all to see. Rinne has still never won a start against the Pittsburgh Penguins.

He was yanked by coach Peter Laviolette after allowing three goals on stream of six shots to start the third period. A tied game turned into a full-on Penguin rout.

Just like that, from leading Conn Smythe candidate to total collapse. Rinne seemingly caved to the weight of the moment.

“Obviously, it’s very disappointing right now,” Rinne said. “For me, I treat this as a once-in-a-lifetime opportunity. I’ve played a long time, and the first time having a chance to play for the Cup. I think you just have to bury these two games and move ahead.”

Two games, yes, but two of the most spectacularly bad goaltending performances in recent memory. Now, Nashville is staring down a 2-0 hole, territory this team has not waded through on this run.

The Predators have outshot the defending Stanley Cup champions by a 64-39 margin through two games, but have nothing to show for it because Rinne couldn’t make a save.

Fellow Finn, Juuse Saros, was left to mop up Rinne’s mess after Pittsburgh scored twice in a span of 15 seconds to roll to an easy, 4-1 victory that during the second intermission somehow seemed destined for overtime.

Rookie Jake Guentzel struck twice for the Penguins, including his fourth game-winner of the post-season, to push his playoff-leading goal total to 12.

Some goals that squeaked through Rinne were frankly hard to explain.

“We’re not looking at anybody,” P.K. Subban said. “We’re looking at ourselves.”

Laviolette was purposely vague when asked post-game whether he would stick with Rinne for Game 3 in the Music City on Saturday night, where his team has been nearly unbeatable in the playoffs with a 7-1 record on home ice.

“Pekka has been excellent for us all year, like I said,” Laviolette responded. “There’s things that we could have done [better]. All three goals in the third period were odd-man rushes.”

Rinne, 34, will have to rebound in a big way. He has allowed eight goals on just 36 shots (.778 save percentage) after entering the Stanley Cup Final with a sparkling .941 mark that led all playoff netminders.

It was goaltending that also did in Laviolette in his last run to the Cup Final. Michael Leighton allowed 20 goals in six games against the Chicago Blackhawks in 2010, being pulled twice, after a .948 run through the playoffs to that point.

Maybe it’s just the Penguins - who have been incredibly opportunistic through the first two games - that are the root of Rinne’s struggle. Rinne is now 0-7-2 in nine career starts against Pittsburgh, including the regular season and playoffs.

His only career win against the Penguins came in relief of Dan Ellis on Jan. 8, 2009. Rinne’s paltry record and .865 save percentage against Pittsburgh are both his worst stats against any NHL opponent.

Rinne’s counterpart, Matt Murray, continued his stellar play, serving as cover-all for a Penguins power play that went 0-for-7 and another 9:50 spell without a single shot on goal.

That means that the Penguins went a combined 46:50 without one shot on net through the first two games and still won both. Murray allowed four goals on 64 shots to start the series (.938).

It’s those moments, in a tied game with a chance to break through and take a series split back home, that Rinne wilted. Subban said both games were decided in a span of three minutes.

“There’s no frustration,” Subban said. “We’re learning. We’re going to learn from those two games. There’s not one ounce of doubt in this locker room.”

They were chanting “We Want The Cup” as Rinne gave way to Saros, another Stanley Cup seemingly now within grasp for Sidney Crosby and the Penguins.

It’s not out of the realm of possibility that the Predators win both at Bridgestone Arena, but it’s only possible if Rinne finds a way to get off the mat.