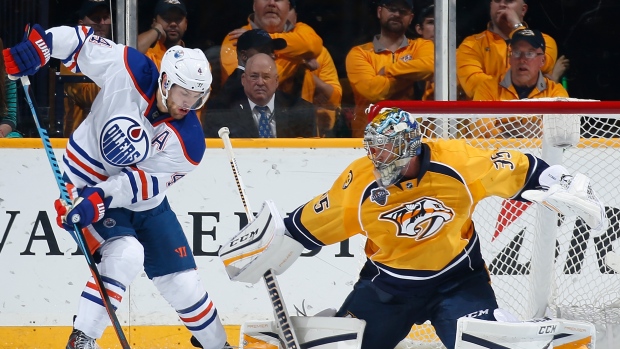 Pekka Rinne made 31 saves to help the Nashville Predators beat the Edmonton Oilers 2-0 on Saturday night.

Craig Smith and Filip Forsberg scored for Nashville, which also won its season opener against Carolina on Thursday. It was Rinne's 37th career shutout.

"It's always a good feeling when you have a shutout," Rinne said. "It's a compliment to your teammates, too. I'm never the only reason if we don't give up any goals."

Edmonton's Connor McDavid, the No. 1 overall pick in the June draft, played 18 1/2 minutes and had two shots on goal. He struggled again on faceoffs, winning only two of 11. He won three of 13 faceoffs in a loss at St. Louis on Thursday night in his NHL debut.

"He's going to get better as time goes on," Edmonton coach Todd McLellan said. "He's played against two of the top defensive corps and defensive teams in the league so far."

Playing in his 383rd career NHL game, Rinne tied Tomas Vokoun's franchise record for appearances by a goaltender. Nashville drafted Rinne with the 258th pick in the 2004 draft.

Rinne holds the franchise record for wins and shutouts.

Smith put Nashville in front at 18:52 of the second period.

Edmonton's Andrej Sekera had the puck just inside the Nashville blue line and was checked by Mike Fisher. Colin Wilson grabbed the puck and was away on a 2-on-1 with Smith. From the left side, Wilson slid a pass to Smith in the lower part of the right circle, and he beat goaltender Cam Talbot with a wrist shot just underneath the crossbar.

"I was coming back with a little bit of speed, so I was able to jump on it," Smith said. "Willy had a great jump and he got up and made a really nice deceptive pass across."

Smith has a goal in each of Nashville's first two games this season.

"We wanted to take them out of a rhythm, and I thought Pekka had some good saves early on in the game to keep it 0-0," Talbot said. "I think we just had a tough time getting pucks to the net and banging those pucks that got to the net in."

Ryan Nugent-Hopkins appeared to tie the game at 6:07 of the third, but a video review confirmed the on-ice call of no goal due to his directing the puck into the net with a distinct kicking motion.

Forsberg added an insurance goal at 13:02 of the third.

Edmonton defenceman Andrew Ference turned the puck over behind the Oilers net, and Nashville's Mike Ribeiro passed to Forsberg coming through the slot, where he beat Talbot for his first of the season.

NOTES: Nashville won each of its three games against Edmonton last season. ... Saturday marked the 17th anniversary of the first regular-season game played by the Predators. ... Edmonton has scored just one goal in its first two games this season.

This story corrects to 383 career NHL games for Rinne.