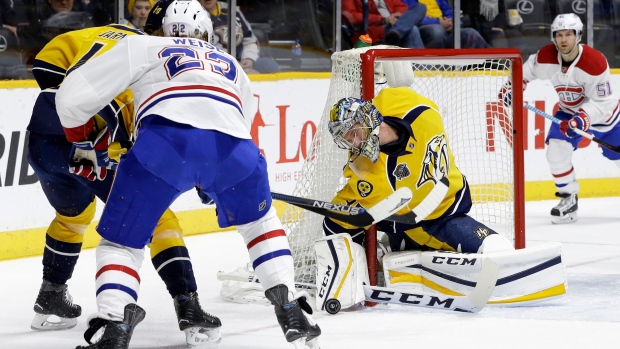 Pekka Rinne couldn't have been more at home.

The three-time Vezina Trophy finalist made 35 saves and Nashville beat Montreal 5-1 on Monday night, giving the Predators their first winning streak in more than a month.

Shea Weber had a goal and two assists, and Roman Josi and Calle Jarnkrok each added a goal and an assist. Colin Wilson scored an empty-netter and had two assists as Nashville won its second straight, something the Predators hadn't done since Nov. 14 and 17.

"Anytime you get time off it's nice not to be dwelling on a loss," Weber said of the next four days off. "It'll be a good Christmas break here and hit the reset button and hopefully keep going."

Alex Galchenyuk scored a power-play goal for Montreal, which lost its fourth straight. The Canadiens have dropped eight of nine.

"We need better performance from goaltending, obviously," Therrien said. "Every goalie that we face, they end up having the first star. The thing a coach could ask is that they are focused on playing the right way, playing in a structure and having a really good work ethic. This is what we ask from the players."

This was the second game of an eight-game road trip for Montreal around the NHL's Christmas break, and the Canadiens took eight of the first nine shots. They wound up outshooting Nashville 36-19 but got only one goal that counted past Rinne.

"We have got to find a way to score more goals," Galchenyuk said. "At some points of the game we play great, at some points we don't. We're going to battle through it and I have no doubt in my mind that we will."

The Predators entered third in the NHL in most shots per game but had few goals to show for their efforts in dropping 11 of 15 until beating Minnesota 3-2 on Saturday night. Nashville appeared very comfortable playing tight defence, and Weber scored on a slap shot at 8:40 of the first period to put the Predators up 1-0 on their second shot of the game.

Rinne stopped all 14 shots in the period, including a nice glove save on a shot from in front by Canadiens centre David Desharnais.

"Peks played great," Weber said. "Can't say enough about how well he did, and obviously give us a chance to win."

The Predators didn't manage a shot on goal in the second until Canadiens right wing Dale Weise was caught holding Craig Smith. Josi scored his ninth on a slap shot at 8:22 off an assist from defence partner Weber, putting Nashville up 2-0.

Nashville made it 3-0 just after a man advantage ended, with Ellis scoring his third off an assist from Wilson at 3:08 to chase Tokarski from the Montreal net. Jarnkrok padded the lead at 8:58 with a wrister off Wilson's second assist of the game.

Montreal thought it at least avoided a shutout when Daniel Carr scored off a rebound midway through the third, but Laviolette won his challenge for contact with Rinne.

The Canadiens finally did prevent a shutout when Galchenyuk scored his eighth off a slap shot on a 4-on-3 at 12:08.

Wilson got his second goal this season with 2:05 left for the final margin.

NOTES: Weber has 15 points in December, most by any NHL player. ... Weber and Josi both are on three-game point streaks, and Weber posted his sixth multipoint game this season. ... Nashville is 10 for 36 on the power play this month. ... Nashville improved to 11-1-2 when leading after two periods. ... Montreal has been outscored 30-14 in the past nine games.