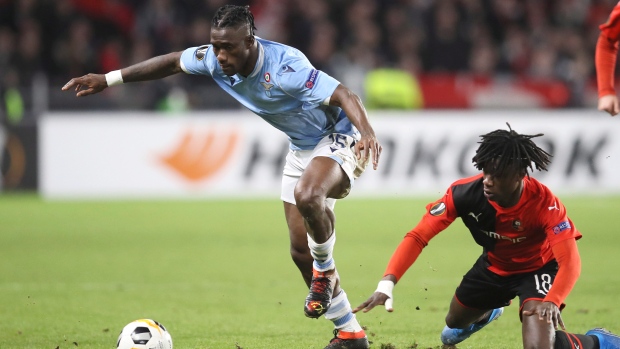 PARIS — Kylian Mbappe scored twice as Paris Saint-Germain moved seven points clear at the top of the French league with a resounding 4-0 win at 10-man Saint-Etienne on Sunday.

Midfielder Leandro Paredes scored his first PSG goal before Mbappe's brace took his club career tally to a whopping 102 a few days before his 21st birthday. An eventful game saw Neymar hold his head in his hands after a rare penalty miss, and the ultra-efficient Mauro Icardi scored yet another clinical goal.

In Lyon, star striker Memphis Depay and midfielder Jeff Reine-Adelaide were coming to terms with serious knee injuries that could keep them out for the rest of the season. Both players ruptured knee ligament during a 1-0 home defeat to fourth-place Rennes.

Saint-Etienne played 65 minutes with 10 men after midfielder Jean-Eudes Aholou’s sending off. It proved an easy win for Thomas Tuchel's side, which has played one game less than second-place Marseille approaching the midseason winter break next weekend.

As Mbappe ran through and smacked the ball into the bottom left corner in the 90th, Saint-Etienne fans were in raucous party mode. Flares were lit and fireworks let off. The referee blew full time straight from the restart, choosing not to play any additional time. He had interrupted the game for about a minute early in the second half to let smoke from flares dissipate. A fan group at Saint-Etienne was celebrating its 20th anniversary and notified the club, referee and stewards know beforehand with the game passing off peacefully.

Paredes netted with a volley from the edge of the penalty area in the 10th, with Saint-Etienne goalkeeper Stephane Ruffier beaten by a deflection off a defender.

Saint-Etienne’s chances were severely reduced when Aholou was sent off in the 25th for a crude two-footed lunge on Paredes.

After Mbappe had a goal correctly ruled out for offside, Ruffier twice made fine saves from Neymar.

Mbappe read Neymar’s first-time pass well and fired the ball under Ruffier's body in the 44th.

Ruffier denied Neymar twice with his legs and PSG winger Angel Di Maria hit the post — within 10 minutes of the second half.

After Neymar was tripped by Mathieu Debuchy, he sent Ruffier the wrong way from the spot but the ball hit the right post in the 62nd.

The ice-cool Icardi confirmed his status as PSG’s new arch-poacher in the place of Edinson Cavani, adroitly clipping home a half-volley at the back post from left back Layvin Kurzawa’s cross in the 74th.

Eduardo Camavinga scored an accomplished late goal as Rennes won 1-0 at Lyon to move up to fourth place.

He shot to prominence with an outstanding performance against PSG in August. Then age 16, he set up a goal and demonstrated a staggering range of passing as he pulled the midfield strings in a 2-1 win.

Now he is celebrating his first league goal, and the way he took it will only have served to remind Europe's leading clubs what a precocious talent Rennes has in its team. The goal came in the 89th minute after he collected a pass wide on the left.

Camavinga advanced confidently at pace toward goal, with his head up. Drawing centre half Joachim Andersen out of the penalty area, Camavinga cut past him with a sudden change of direction, then held off two other defenders before slotting the ball past goalkeeper Anthony Lopes and in off the left post.

Rennes is one point behind third-place Lille, having played one game less. Lyon slipped down to eighth spot after a second straight home defeat.

Also Sunday, seventh-place Bordeaux lost 1-0 against Strasbourg, with striker Ludovic Ajorque netting for the visitors in the 11th minute. It was Ajorque's sixth goal of the season and moved the Alsace-based side up to 13th place.