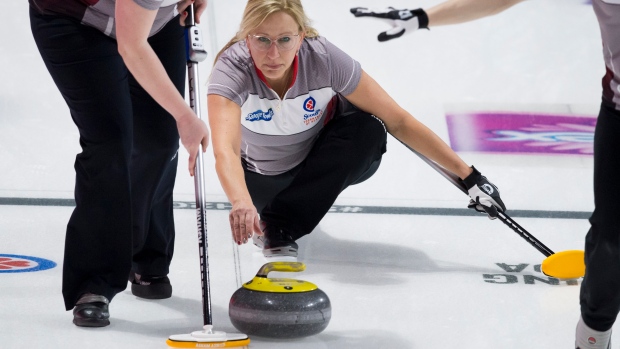 MOOSE JAW, Sask. – Every Canadian women’s curling championship features a handful of notable curlers making their first appearance under the big lights at the Scotties Tournament of Hearts.

This year is no different.

Three quarters of Team Alberta, led by 28-year-old skip Laura Walker, are Scotties rookies while the entire British Columbia foursome, captained by 24-year-old Corynn Brown, is getting their first taste of the national championship. Emma Logan, 22, is a Scotties first timer as well, playing with her aunt Mary-Anne Arsenault on Team Nova Scotia.

On the other end of the spectrum is 56-year-old Jo-Ann Rizzo, one of the oldest Tournament of Hearts rookies in the history of the bonspiel. The Brantford, Ont., resident is playing fourth for Kerry Galusha’s Northwest Territories rink as the team’s lone out-of-territory curler.

Despite never playing at nationals, curling fans have probably heard the name Rizzo a few times before. Rizzo most notably played for Sherry Middaugh in Ontario for many years and competed in 13 Ontario Scotties and four Canada Cups. The peak of her career came in 2013 when she and Middaugh were a win away from representing Canada at the 2014 Olympics before losing to Team Jennifer Jones in final.

She most recently won back-to-back Ontario senior championships in 2016 and 2017 as a skip.

After parting ways with Middaugh in 2018, Rizzo thought her chances of competing at the Tournament of Hearts may have been over. This was until she got the idea to reach out to Team Galusha in the spring following the departure of their second Brittany Tran.

“If this didn’t pan out when I reached out to Kerry, then I think that would probably be it for me,” Rizzo told TSN.ca.

She didn’t have to worry very long as Galusha quickly welcomed Rizzo to the fold with open arms. The path to the Scotties through any of the territories is much clearer than Ontario. Galusha ran the table in playdowns to punch an incredible 17th ticket to the Scotties and the very first for Rizzo.

“It’s a dream come true, obviously,” said Rizzo. “I strived for it and I didn’t give up and thank God for the girls from the North that were willing to take me on the team. It has been a great experience so far.”

To make things even more special, Rizzo is throwing last rocks as the fourth, with Galusha playing with a gluteal muscle injury suffered in November while playing at the Canadian mixed curling championship.

Rizzo and company picked up their first two wins of the Scotties on Tuesday, evening their record at 2-2 and staying alive for championship pool contention in Pool B. Rizzo shot 91 per cent in their morning win against Nunavut and 82 per cent against Yukon in the afternoon.

Rizzo, who was born in Zweibrucken, Germany, says despite this being her first Scotties, she has plenty of prime-time curler experience to get things done on the ice.

“Not only experience, but that I’m not a deer in the headlights out here,” she said. “I actually played in the Canada Cup here and the whole arena environment. They didn’t have to coach me along the way…you know the nervous rookie – even though in the first game I was nervous anyway. I think it helps.”

Rizzo says the team’s goal is make the championship pool after Team Galusha came up a win short last year in Sydney, N.S.

“We had some bumps along the way and so I think we’re finally getting in our groove and figuring everything out,” said Rizzo.

The Northwest Territories are back on the ice Tuesday morning against British Columbia.