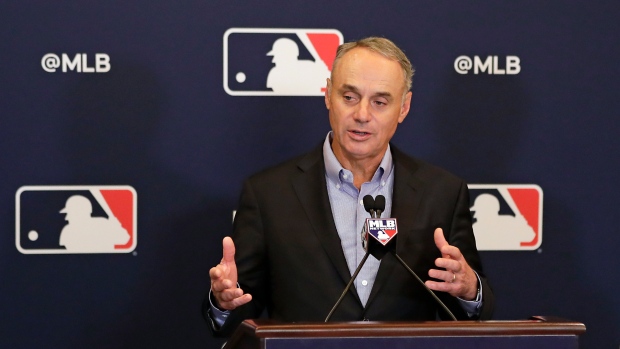 HOUSTON — Baseball Commissioner Rob Manfred discounts the drop in home runs during the post-season and expects to receive a new report from scientists on baseballs by the end of the year.

Batters finished the regular season with 6,776 home runs, shattering the previous record of 6,105 set two years ago. The average of 2.79 homers per game has dropped to 2.45 in the post-season, with 76 long balls in 31 games entering Wednesday.

A May 2018 report to Major League Baseball by professors specializing in physics, mechanical engineering, statistics and mathematics concluded there was less drag on the ball, causing more home runs. The cause of the decrease in drag has not been explained.

"I think that analysis based on large sample sizes, meaning season-long samples, is really the most reliable research," Manfred said before World Series Game 2. "Variables like weather and who is pitching, that all washes out in a very large sample. When you start picking three days in the post-season where the weather's different, you get the very best pitching in the game, it becomes less reliable."

Manfred dismissed speculation that post-season baseballs are different than the ones used during the regular season.

"I can tell you one thing for absolute certain: Just like every other year, the balls that were used in this post-season were selected from lots that were used during the regular season," he said. "There is no difference in those baseballs."

Houston pitcher Justin Verlander has been among the players most outspoken about changes to baseballs this year.

"At the end of the day as well, whether you're a hitter or whether you're a pitcher, you're looking for consistency," union head Tony Clark said. "And there is nobody more equipped to appreciate the differences in the ball and or how it's affecting the play than the guys that are on the field. It's an interesting exercise to have guys close your eyes and lay out balls and be able to tell the difference between the ball with their eyes closed."