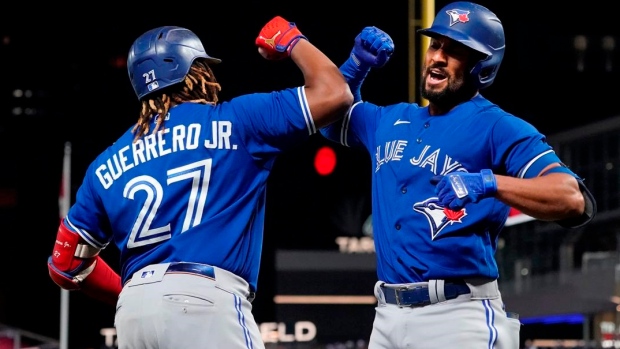 The Toronto Blue Jays are well represented in the American League MVP balloting.

After two up-and-down seasons to begin his much-anticipated big league career, Guerrero Jr. finally lived up to what he was expected to be.

Guerrero was named to the American League All-Star Team for the first time in his career and took home All-Star Game MVP honours after a mammoth home run off National League CY Young hopeful Corbin Burnes.

The Bay Area native also led the Blue Jays with a Wins Above Replacement of 7.2 and led the league in plate appearances (724).

Semien joined the Jays last off-season after six years with the Oakland Athletics, signing a one-year, $18 million deal and flourished rotating between the top of the lineup and middle of the order. His 2021 season was also a major rebound from 2020 where he hit just .223 with an OPS of .679 in 53 games.

Robbie Ray is one step closer to winning the first Cy Young of his career.

The Blue Jays left-hander was announced as one of three American League pitchers up for the award, joining Gerrit Cole of the New York Yankees and Lance Lynn of the Chicago White Sox.

Ray’s 2021 season was a complete turnaround from the 2020 campaign which saw him pitch to an ERA of 6.62 in 12 appearances and an average of 7.8 walks per nine innings. He was traded from the Arizona Diamondbacks to the Blue Jays along with cash for left-hander Travis Bergen.

The 30-year-old then became the first free agent to sign with a team last off-season, inking a one-year, $8 million contract to stay with the Jays after being encouraged by his brief time with the team down the stretch of the season.