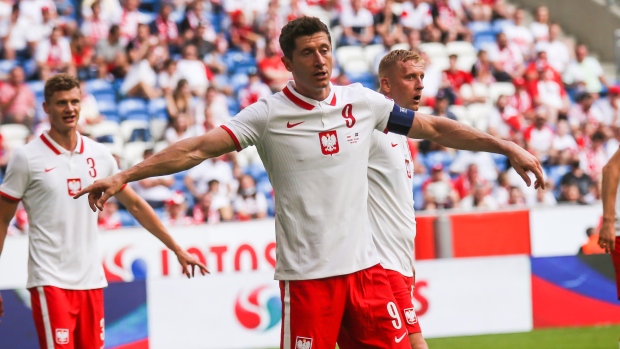 With games against Spain and Sweden on the horizon, both Poland and Slovakia will want to get off to a good start as they meet in their Group E opener on Monday.

Poland will enter that contest with one of the most talented players in the world as Robert Lewandowski continues to lead the line for them and make headlines with his goal scoring prowess.

The Bayern Munich striker helped take Poland into the quarterfinals of the 2016 tournament and scored for his side as they fell to Portugal, the eventual champions, on penalties.

Poland will have to reverse their recent run of form if they plan to get off to a good start at the Euros as they only have one victory in their last seven fixtures across all competitions.

Poland’s head coach Paulo Sousa knows his side will be in tough in their tournament opener.

"It will not be easy. It will be a very dynamic game, it will be mental, about focus, we can't make any mistakes, we need to be ready,” said Sousa.  “We have to find gaps in Slovakia, a team that is well organized and defends well with a mid-to-low block. They're really strong in transition, very direct, they don't spend much energy in the build-up and are also really strong from set pieces. ”

Slovakia faced a tough test to even get into EURO 2020 as they needed penalties to dispatch the Republic of Ireland before earning their place in the tournament with an extra-time winner over Northern Ireland.

Much like their opponents on Monday, Slovakia also advanced to the knockout stage at EURO 2016.  They were beaten by Germany in the Round of 16.

Marek Hamšík is Slovakia’s most capped player as well as their leading goal scorer and will once again be counted on to be the back bone of their team at this tournament.

Head coach Štefan Tarkovič is looking for a better start than they had in 2016, but knows an opening game loss will not eliminate them from the competition.

"We worked hard to get here and are looking forward to getting under way,” said Tarkovič.  “It's a big challenge for us. Poland are ahead of us in the FIFA rankings, and we are coming into the tournament as outsiders, but I think the squads are evenly matched. A good start to the finals is important, that's for sure, but we lost the first game in France in 2016, against Wales, and still managed to qualify."