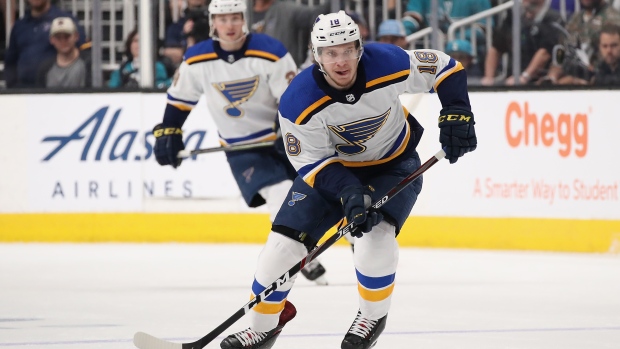 Robert Thomas is skating today but hasn’t been handling puck much so far. Seems to be mostly following behind Robby Fabbri in drills. Thomas missed past two games with unspecified injury. pic.twitter.com/ZI5yQQV28k

NHL.com's Tom Gulitti reported Thomas didn't handle the puck much while skating, and mostly followed behind Robby Fabbri in drills.

Thomas missed the past two games in the Stanley Cup Final for the Blues with an unspecified injury.

Defenceman Vince Dunn was also skating for the Blues Sunday.

#stlblues practicing right now. Both Robert Thomas and Vince Dunn are out here.

Dunn missed the first two games of the Cup Final and has not played since Game 3 of the Western Conference Final after taking a puck to the face off a shot from San Jose's Brenden Dillon. Blues head coach Craig Berube said Dunn was close to returning ahead of Game 2.

The Blues trail the Boston Bruins 2-1 in the Stanley Cup Final after getting routed 7-2 in Game 3 Saturday night.