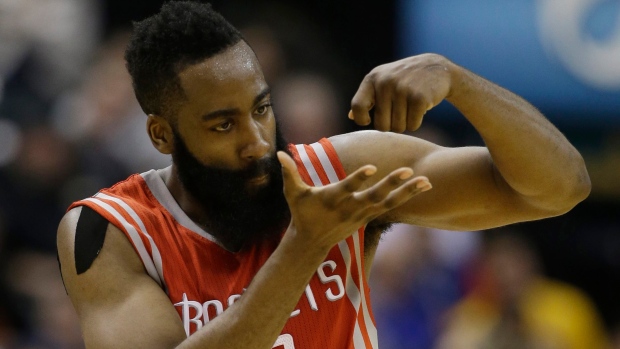 NEW ORLEANS - Dwight Howard corralled a no-look pass from James Harden along the baseline and went up quickly for a forceful one-handed stuff.

That first-quarter highlight alone would have been a promising sign for a Rockets squad gearing up for the playoffs. Erasing a 17-point deficit on the road against a desperate Pelicans team made for an even more satisfying night.

Harden had 25 points and 10 assists, Howard had seven rebounds and a block on Anthony Davis in his return from a two-month absence, and Houston handed New Orleans its fourth straight loss with a 95-93 victory on Wednesday.

"We came back from a big deficit and the one thing I kept telling the fellas was, we've got to stop playing around with the game," Howard said. "We're on a big mission to win a championship, and we've got to wake up and play."

Howard, who had missed 26 games with a right knee injury since last stepping on the court on Jan. 23, was held under 17 minutes by coach Kevin McHale. He finished with only four points, but said scoring is not among his immediate priorities on a team with plenty of offensive options.

"I felt pretty good. It seemed like as soon as I got out there it was time to sit back down, so it was kind of an adjustment," Howard said. "I'm just happy to be back out there playing. The main thing for me is just really helping the team on the defensive end. The other stuff will come."

Davis had 24 points and 14 rebounds for the Pelicans, but uncharacteristically missed eight free throws, including one that could have pulled New Orleans to 94-93 with 7 seconds left.

The Pelicans still had a chance to try for a tying 3-pointer after Harden missed a free throw with 3.3 seconds left, but Corey Brewer intentionally fouled Eric Gordon on the inbounds pass to force free throws. Gordon made the first and intentionally missed the second, hoping for a tying putback that never materialized.

As the last spectators trickled out, Davis walked back on the court from the locker room, still in uniform, and worked on his free throws until he made 100.

Trevor Ariza had 22 points, nine rebounds and three steals, and Donatas Motiejunas scored 21 for Houston, which trimmed a 17-point second-quarter deficit to three by halftime before surging into the lead for good in the third quarter.

Tyreke Evans scored 28 points for New Orleans in his return from a sprained ankle that sidelined him for one game. Quincy Pondexter added 10 points, but New Orleans missed 12 free throws in a loss that kept them 3 1/2 games behind Oklahoma City for the final playoff spot in the Western Conference.

Ariza scored 11 in the third quarter, starting with a 3 as Houston opened the period with a 9-0 run to take a 58-52 lead. Ariza later added consecutive 3s and a dunk. Harden, meanwhile, scored 10 in the period, highlighted by a sudden, driving left-handed dunk between the 6-foot-10 Davis and 7-footer Omer Asik.

"It took us a while to finally get our footing and start attacking them," McHale said. "We got more aggressive on the defensive end, which pumped up our offence a little bit and we were able to get going."

Rockets: Houston beat New Orleans for the first time this season after losing the previous two meetings. ... Josh Smith played with a sprained right ankle, while Brewer played with a left oblique strain. ... Houston made only 6 of 22 3-point attempts, but made up for it with 62 points in the paint.

Pelicans: Davis briefly left the game, holding his right shoulder, after a collision with Brewer in the fourth quarter, but returned minutes later. ... Gordon missed his all five of his field goals and had only a single point until he added a pair of free throws in the final seconds of the third quarter.