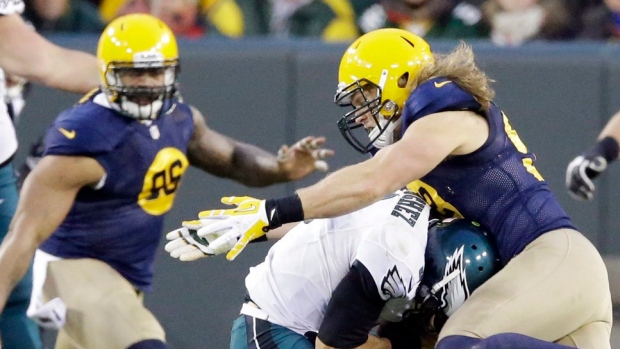 GREEN BAY, Wis. - Aaron Rodgers handed off to Eddie Lacy, turned and started jogging to the sideline before his running back had crossed the goal line for a 1-yard touchdown. It was as if the Green Bay quarterback knew what was going to happen.

Just another first-half score and big early lead for the Packers at Lambeau Field.

Rodgers passed for 341 yards and three touchdowns, Lacy accounted for two scores, and the Packers defence stuffed the high-octane Philadelphia Eagles for a 53-20 win Sunday.

"This is not easy," Rodgers said.

It sure looks that way, though. The Packers (7-3) blew out another opponent in the cold comfort of home after a fast start.

"There's a lot of preparation that goes into it," Rodgers added. "It takes 11 guys to win, to do the job to make something like that happen."

The matchup of NFC contenders quickly turned lopsided after Green Bay took a 30-6 halftime lead. Rodgers threw for two touchdowns in the first half, while Micah Hyde scored on a 75-yard punt return.

Julius Peppers finished off the Eagles by returning Mark Sanchez's pass 52 yards for a 39-6 lead in the third quarter, the second interception return for a score this season for the veteran.

"It's good to see that. He pretty much got a gift," linebacker Clay Matthews said with a smile.

Philadelphia (7-3) was held to 11 points below its NFC-leading scoring average by a Packers defence rejuvenated since Matthews started getting more time at inside linebacker. Matthews finished with five tackles and a sack after rushing from his traditional outside spot unabated to Sanchez.

Green Bay's offence was in good hands again with Rodgers, who broke Tom Brady's NFL record of 288 straight passes at home without an interception. Rodgers finished 22 of 36.

The Packers set another record by putting up at least 28 points in a first half for the fourth straight home game. They've outscored opponents 128-9 before halftime during that stretch.

"We felt strongly that this game was going to come down to big plays, the big-play opportunities," coach Mike McCarthy said, "and I thought our players did an excellent job in all three phases."

Playing with big leads allows the Packers defence to focus on the pass and hone in on opposing quarterbacks.

Sanchez flopped in his second start since taking over for the injured Nick Foles. He was 26 of 44 for 346 yards with two touchdowns and two interceptions.

To make things worse, Sanchez couldn't corral a high snap out of the shotgun with an empty backfield in the fourth quarter. Cornerback Casey Hayward scooped up the loose ball and jogged 49 yards into the end zone with an escort of two blockers to make it 53-13.

The Packers also got to Sanchez early with sacks on Philadelphia's first three drives.

"They played outstanding and we played pretty poorly," Sanchez said.

It was the Eagles' worst loss under second-year coach Chip Kelly. The previous low was a 52-20 thrashing at Denver in Week 4 last season, and Kelly is now the only coach in team history to allow 50 points twice.

"None of us played where we needed to play against this team," Kelly said.

The Eagles finally reached the end zone after Sanchez hit receiver Jordan Matthews for a 10-yard touchdown pass to make it 39-13 with 2:21 left in the third quarter.

The Packers had no such problems.

Rodgers found Jordy Nelson streaking down the right sideline for a 64-yard completion on the game's third play from scrimmage — the pass attempt that allowed Rodgers to break Brady's record.

Rodgers hit Davante Adams for a 6-yard touchdown catch late in the first quarter. Nelson hauled in a 27-yard scoring pass with 10:39 left in the second, making the grab while delicately navigating the sideline near the pylon to make it 24-3.

NOTES: Nelson finished with four catches for 109 yards, while Randall Cobb had 10 receptions for 129 yards. ... Nelson appeared to reach down at his right hamstring after making the Lambeau Leap on his touchdown, but McCarthy said afterward his top receiver seemed fine. ... Lacy also turned a 32-yard catch into a touchdown. ... Eagles RB LeSean McCoy had 88 yards on 23 attempts.