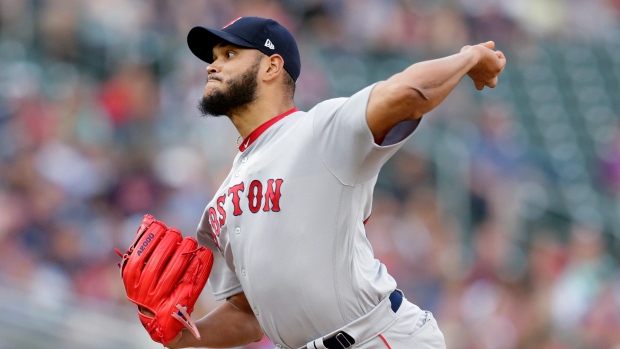 MINNEAPOLIS — Eduardo Rodríguez knew his job was to pile up innings after the Boston Red Sox had to go 17 innings in Tuesday's loss at Minnesota.

Even after giving up runs early Wednesday night, Rodriguez wasn't going to be taken out. He had to handle the workload, regardless of results.

The Boston left-hander picked up the team's bullpen, Brock Holt drove in three runs and the Red Sox beat the Twins 9-4 on Wednesday night.

Rodríguez (8-4) allowed four runs and eight hits, but more important, he lasted seven innings after the Red Sox used eight relievers in Tuesday's marathon. Rodriguez has gone at least seven in his past two starts, relying more on his fastball and changeup mix, and has given the team much-needed innings in each outing.

"It means a lot to save the bullpen, go out there and give seven innings," Rodriguez said. "I think for me, it's something I've tried to do a long time. I had a chance the last two starts to help the bullpen and feel really good with that."

Boston scored three runs in the second, fifth and eighth innings to win for the seventh time in eight games. The AL Central-leading Twins have dropped three of four and lost a home series for just the second time this season.

"That might have been some of the worst stuff I've had in quite a while," Gibson said. "Frustrating night knowing that anything that looked like a quality start was a win, unfortunately, but I didn't get it done."

Eddie Rosario's RBI single put Minnesota ahead in the first, but Holt, Michael Chavis and Mookie Betts each had RBI singles in the second.

Willians Astudillo and Max Kepler homered in the fourth to give the Twins a 4-3 lead, but Boston rallied again.

Xander Bogaerts ripped an RBI double to left. Holt plated another run with a sacrifice fly and Chavis chased Gibson with his second hit.

"Last night, you start playing that many innings, guys get a little antsy, maybe try to do a little bit too much," Holt said. "I feel like our situational hitting was pretty solid tonight. We got a guy on third, we got him in, for the most part. Just better approaches tonight, I think."

Rodríguez settled in and retired 11 of the final 12 batters he faced after Kepler's homer.

"Ultimately, he was able to persevere through some innings where he had to work a little bit," Minnesota manager Rocco Baldelli said of Rodriguez. "Early on, we thought maybe we'd have the opportunity to get to him with the kinds of at-bats we were having. Ultimately, he did a nice job.

Boston's Rafael Devers left in fifth inning with tightness in his right hamstring. He was injured running out an infield single. Cora said Devers would likely be out of the lineup Friday, but called his third baseman day to day.

"I just felt that it was a little bit tight," Devers said through an interpreter. "It's not as bad as what I dealt with last year. Hopefully, I can go out there and play, but it's up to the coaches to see if they let me play on Friday."

The Red Sox placed Hector Velázquez on the injured list with a lower back strain and recalled right-hander Josh Smith from Triple-A Pawtucket. Velázquez pitched four innings in Tuesday's game, but had a recurrence of the back injury that forced him to the injured list before he returned Tuesday.

Astudillo was recalled from Triple-A Rochester, and the team selected the contract of right-hander Sean Poppen from Triple-A. Poppen, a 19th-round draft choice in 2016 out of Harvard, made his major league debut and allowed three runs in four innings.

Baldelli said after the game that Poppen would be optioned back to Rochester.

Red Sox: Nathan Eovaldi (right elbow) threw for the third straight day. Cora said Eovaldi would take a day off and the team would map out his next throwing session. ... Heath Hembree (right elbow extensor strain) played catch before the game.

Twins: To make room on the 40-man roster for Poppen, Minnesota moved Adalberto Mejía to the 60-day disabled list. Mejía has been out since the start of May with a right calf strain.

Red Sox: Following an off day, Boston returns home Friday against Toronto. Chris Sale (3-7, 3.49 ERA) takes the mound for the Red Sox with the Jays starting Trent Thornton (2-5, 4.36). Sale has allowed two total runs over his past three starts and has struck out at least 10 in four straight games.

Twins: Jake Odorizzi (10-2, 2.24) will try to keep his run going as Minnesota opens a four-game series at Kansas City on Thursday. Odorizzi has won 10 straight decisions and beat the Royals in his last start. Kansas City will start Glenn Sparkman (1-3, 4.01).