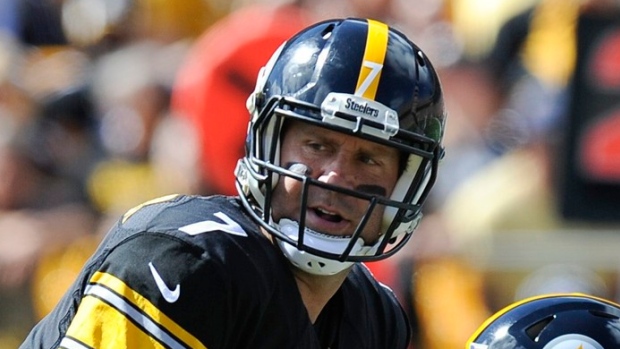 PITTSBURGH, Pa. - Ben Roethlisberger is back for the Pittsburgh Steelers.

Coach Mike Tomlin confirmed the news on Tuesday, saying the two-time Super Bowl-winning quarterback is preparing to play Sunday against unbeaten Cincinnati after missing four games with a sprained knee and bruised leg.

"We don't have any reservations or limitations about his availability," Tomlin said. "As I sit here today, we are comfortable with where he is in his overall availability this week."

Roethlisberger initially feared the worst after he left in the third quarter of a September win at St. Louis, but he was relieved to learn the injury didn't end his season.

Now, he's returning on the early end of the four-to-six week timetable that was projected, and just in time.

Pittsburgh, which went 2-2 without Roethlisberger, is 4-3 overall and 2 1/2 games behind the Bengals for the top spot in the AFC North.

Roethlisberger lobbied to play two weeks ago against Arizona, returning to 7-on-7 work and pushed harder last week prior to Sunday's game at Kansas City.

He practiced in a limited capacity for three days last week and was listed as questionable on the injury report before the Steelers gave Landry Jones his first NFL start after he sparked the team to a come-from-behind win a week earlier.

The Steelers hope for the same boost from Roethlisberger.

He mentioned some discomfort in his knee late last week. Tomlin said the Steelers will keep an eye on their franchise quarterback during practice to make sure there aren't any setbacks.

"I'm not going to monitor it personally," Tomlin said. "I'll let Ben and the medical staff take care of that business, and I'll just check in with those guys periodically, like I always do over the course of a work week."

Tomlin said Roethlisberger's ability to move is taken into consideration when game-planning, but he doesn't anticipate any issues.

"At this juncture, we're not going to assume Ben will be limited from a mobility standpoint," Tomlin said.

It also shouldn't be assumed that Roethlisberger will be able to step in and immediately perform like the elite-level quarterback, who ranked at the top or among the league leaders in several key statistical categories prior to his injury.

There may be a rust factor involved as Roethlisberger appeared in all 16 games the previous two seasons, but never missed more than four in a season.

"There's always concern in that regard anytime someone is coming off an injury, but we're not going to lose a lot of sleep over that," Tomlin said. "Ben has played a lot of ball for us, he has great continuity and recall from his time in the system.

"He'll have a full week of preparation, and he participated in a partial capacity a week ago. Hopefully, all of these things will allow him to push past some of the anxiety associated with getting back there."

The Steelers are just happy to see their franchise quarterback return, particularly in a key division game against unbeaten Cincinnati.

"We are going to need him," Tomlin said. "Cincinnati is really rolling on all cylinders right now."

NOTES: Steelers LB Terence Garvin will be out a couple of weeks with an MCL sprain. ... Steelers CB William Gay could be limited in practice after suffering a shoulder injury Sunday against Kansas City. ... Steelers DE Stephon Tuitt (knee) and S Will Allen (ankle) could return to practice after missing Sunday's game.