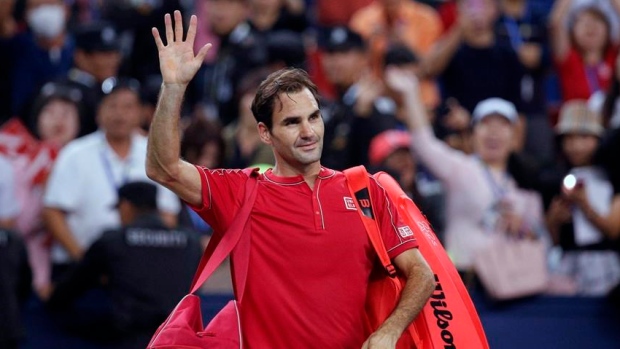 Already the most successful male tennis player in terms of Grand Slam singles titles, Federer wants to add another piece of hardware to his impressive collection. If he's healthy.

"My heart decided I would love to play at the Olympic Games again," Federer said Monday during an exhibition event in Tokyo.

He made his Olympic debut for Switzerland in 2000 at Sydney, where he met his wife, Mirka, and finished fourth in singles. He competed at Athens in 2004 before combining with Stan Wawrinka to win the Olympic gold medal in doubles at Beijing in 2008. Federer finished with silver in the singles after losing to Andy Murray at Wimbledon in the final of the 2012 London Games, and he missed the 2016 Olympics in Rio de Janeiro because of injury.

"If I am healthy I am coming. Absolutely," the 38-year-old Federer said. "I have been thinking about it for weeks now, just trying to figure the schedule more than anything, with my four children and my wife. Figuring out the U.S. Open, what do with the clay (Roland Garros), what to do with the grass (Wimbledon) and just how that all lines up."

The 20-time major winner said he was disappointed to skip the Rio Olympics because of a knee injury that sidelined him for the rest of the year at Wimbledon in 2016.

"Every Olympic Games has been very, very special to me," he said, adding that he figured he may as well make the announcement "while I was actually in the city where the Olympics will take place."

"I just figured it was an organic place to do that," he said, "so I am very happy to announce it here."