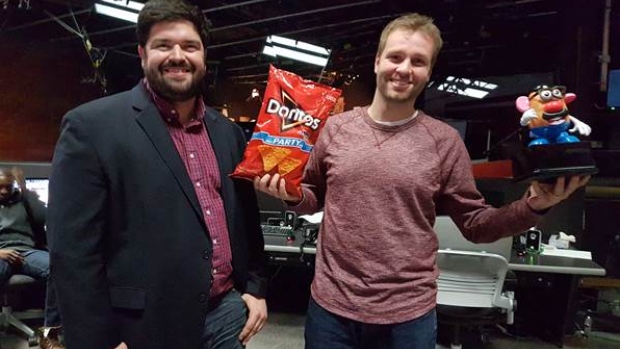 TORONTO – The results are in! TSN's #1 favourite snacking competition – STARCH MADNESS – has a new champion as TSN Digital’s Gethan Rogers and Doritos Nacho Cheese were crowned champions of 2017 STARCH MADNESS.

It all came down to a tie-breaker as Rogers took home the 2017 STARCH MADNESS title by correctly picking a total of 13 correct matchups including champion Doritos Nacho Cheese, and was the only one of the two tied finalists to fill out the number of votes tie-breaker.

Doritos Nacho Cheese enjoyed a Cinderella run through the tournament, picking up high-profile wins against fan-favourite Sour Cream & Onion, 2015 champion All Dressed, and the tag-team powerhouse Sea Salt & Malt Vinegar in the Final to claim their first title in team and flavour history.

Sea Salt & Malt Vinegar put up a dominating performance in their inaugural tournament, advancing to the Finals after knocking off defending champion Chicago Mix in the Elite Eight before taking a bite out of Canadian favourite Ketchup in the Final Four.

“With a slew of tantalizing competitors, several scrumptious upsets, and a worthy champion in Doritos Nacho Cheese, the 2017 STARCH MADNESS Tournament was truly delectable,” said TSN Food Sports host Rob Duffy. “From all of us here at TSN Food Sports, our most sincere thanks to all who submitted brackets and took the time to discuss and debate their favourite flavours. I’m excited to see how these talented snacks re-salt and re-season in anticipation of next year. I look forward to seeing STARCH MADNESS continue to expand and reach for even greater levels of snack-cess. The snack’s the limit!”

“The 2017 STARCH MADNESS tournament was our best yet, a real mixed bag of compelling matchups and performances we’ll remember for years to come,” said Duncan Clair, NCEA Commissioner, TSN Food Sports CSO (Chief Snacking Officer), and TSN Fun Squad Executive Chair. “I’m thrilled to see Doritos Nacho Cheese bounce back without the need of a five second rule. They are a worthy champion and so is Gethan. His taste buds were on point and so were his predictions. I have a feeling victory tastes a lot like delicious nacho cheese dust for him today.”

“Hats off to Miss Vickie’s Sea Salt & Malt Vinegar for the valiant effort it put forth in the final against a most formidable opponent. Qualifying for its first tournament appearance ever, Salt & Malt came in with a chip on its shoulder and was not to be taken, or eaten, lightly. Proving to be a juggernaut in its own right, its bold combination of flavours were ultimately not enough to satiate the appetites of the masses. TSN Food Sports looks forward to the flavour’s triumphant return in 2018.”

The fourth annual STARCH MADNESS will return in March 2018. Thank you to all who participated!

The National Chip Eating Association is devoted to helping chips and other member snacks reach their potential through snacking competition. For over one year, the NCEA’s annual Starch Madness Tournament is one of the most popular events in snacking around the world. For more information, please visit starchmadness.ca.