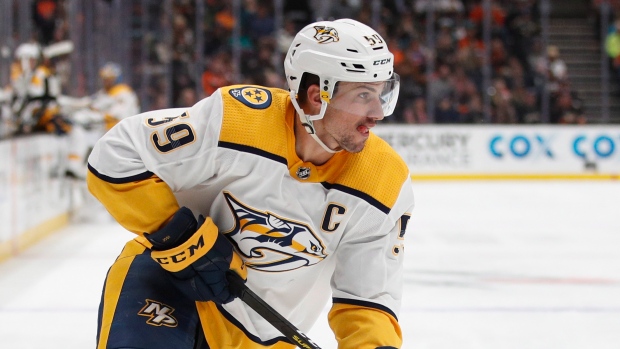 NASHVILLE, Tenn. (AP) — Roman Josi had two goals and two assists to lead the Nashville Predators to a 4-1 victory over the Arizona Coyotes on Saturday night.

“I thought we were tonight,” Nashville coach John Hynes said. “We got off to a good start. I felt our special teams were good. Juice came up big when we needed him in certain saves, so it was good. I’m really proud of the guys.”

Jakob Chychrun scored and Karel Vejmelka made 19 saves for the struggling Coyotes, who are 1-13-1 this season.

“I think they came out with a lot more urgency than we did, which is unacceptable when we’re a team that’s got one win,” Chychrun said. “I don’t know why we aren’t coming out with more urgency. It’s frustrating.”

Duchene scored the game’s first goal with 8:46 left in the first period. On a delayed penalty call against Arizona, Josi found Duchene in the left circle with a pass from the high slot. Duchene beat Vejmelka low to the stick side for his ninth of the season.

Josi made it 2-0 with a power goal with 1:48 left in the first on a one-timer off of a pass from Tolvanen.

“That was not the start we wanted,” Arizona coach André Tourigny said. “It was frustrating to see our first period.”

Granlund put Nashville up 3-0 at 7:02 of the second with a wrist shot from the right faceoff dot through traffic.

Fresh out of the penalty box, Josi scored his second of the night and sixth of the season at 5:54 of the third when he banked his shot from below the goal line off of Vejmelka’s skate and into the net.

“I feel good this year,” Josi said. “I think it’s been going well. Obviously, it’s always hard to compare years to years, but I definitely feel good. I think last year, I wasn’t too happy with my year. I knew I had kind of another level. It’s been a good start.”

Chychrun spoiled Saros’ shutout bid with a power-play goal with 6:30 left in the third.

With a goal and an assist Saturday, Duchene extended his goal-scoring streak to three games. He has 11 points (seven goals, four assists) in his last seven games. Duchene’s nine goals and 16 points exceed his totals from last season, an injury-shortened campaign where he played just 34 games.

Coyotes forward Dmitrij Jaskin was injured at 12:30 of the first period. Carrying the puck in the neutral zone, Jaskin collided with Nashville defenseman Mark Borowiecki. Following the hit, Arizona’s Antoine Roussel engaged Borowiecki in a fight.

Arizona announced that Jaskin would not return to the game due lower body injury. After the game, Tourigny said the injury would keep Jaskin out of the lineup for a while.

Saturday marked the 76th regular season meeting between the Predators and Coyotes, but the first as division foes. Arizona was moved to the Central Division when the Seattle Kraken entered the league at the beginning of this season and was placed in the Pacific Division.

Predators: At Toronto on Tuesday night to open a three-game trip.