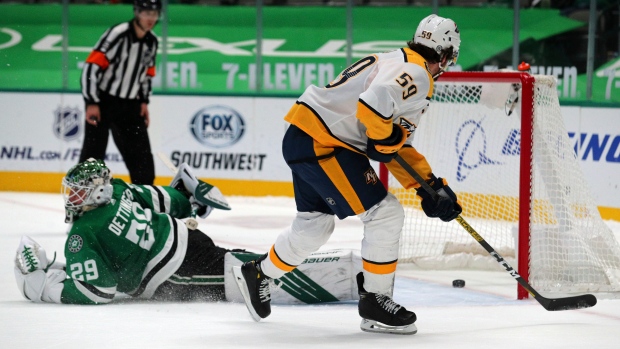 Josi and Forsberg scored in the shootout as the Predators ended a three-game losing streak. Rookie Eeli Tolvanen had a goal and an assist in regulation, Mikael Granlund and Calle Jarnkrok added goals and Pekka Rinne made 35 saves for Nashville.

Filip Forsberg added two assists as the Predators built a 3-0 lead through two periods. Nashville had lost its last three games, including the last two against Florida.

“We didn’t like our last couple games,” coach John Hynes said. “We got off to a good start and they made a push. There are certain things we could have handled better, but you find a way to win.”

Radek Faksa, Joe Pavelski and rookie Jason Roberson scored in the final eight minutes of the third period for Dallas — with Robertson’s score coming with 56.8 seconds left to send the game into overtime.

Rookie Jake Oettinger made 17 saves one night after the 22-year-old’s first NHL shutout for the Stars, who are 1-4-1 in their last six games. Robertson also scored the Stars’ only shootout goal and had an assist.

The Predators and Stars both gained ground in trying to earn playoff spots in the Central Division thanks to the Chicago Blackhawks’ regulation loss Sunday afternoon. Sixth-place Nashville trails fourth-place Chicago by nine points with one game in hand on the Blackhawks. Seventh-place Dallas is 12 points out of fourth with six games in hand on Chicago.

For the second time in three home games, the Stars rallied from a 3-0 deficit. Last Thursday, they earned no points when losing 3-2 in regulation to Columbus.

“You get a little desperate, you start really playing on your toes and pushing,” said Pavelski, who had a career-high 10 shots. “It’s about getting that first one earlier.”

Said Stars coach Rick Bowness: “We had 22 scoring chances; they had 11. What do you want me to do tell you?”

Granlund deflected in a wrist shot from Forsberg from the high slot for his fifth goal of the season to give the Predators a 1-0 lead at 15:31 of the first period on the power play.

Only 1:18 later, Jarnkrok collected a loose puck between the circles and lifted a shot into the upper corner for his sixth goal of the season and a 2-0 lead.

Tolvanen scored his fifth goal of the season and his fourth power play goal – the most among NHL rookies – on a blistering slap shot from the left point at 13:12 of the second period. That came 35 seconds after a goal by Josi was successfully challenged by Dallas for goaltender interference on Granlund.

Faksa’s backhand goal came at 12:30 of the third period. Pavelski scored at 14:46 near the crease for his 12th of the season and NHL-leading 10th power-play goal just as the net was moved off the right peg by Rinne, ruled good following a review.

OLDIE BUT GOODIE IN NET

With Juuse Saros placed on injured reserve last Thursday, the 38-year-old Rinne played on consecutive days in different cities for the first time in 15 months. On Saturday, he allowed six goals in a 6-2 loss against Florida.

Rinne made multiple point-blank saves in regulation, including on a Pavelski breakaway. At 1-1 in the shootout in the top of the third round, he lifted his stick to block a shot by Pavelski, who grimaced as he skated away from the net.

“He makes those saves every single day in practice,” Granlund said. “He’s one of the best goalies I’ve ever seen, and I’m so happy for him.”

Oettinger was the 26th overall draftee in 2017, Tolvanen the 30th. … An assist gave Dallas captain Jamie Benn 699 career points. … Sunday’s game was the makeup of the Feb. 15 game postponed because of the weather-related power emergency in Texas.

Predators: Visit Carolina on Tuesday in the second game of an eight-game, 15-day road trip that will end back in Dallas on March 21.

Stars: Host Chicago on Tuesday and Thursday to close a six-game homestand.