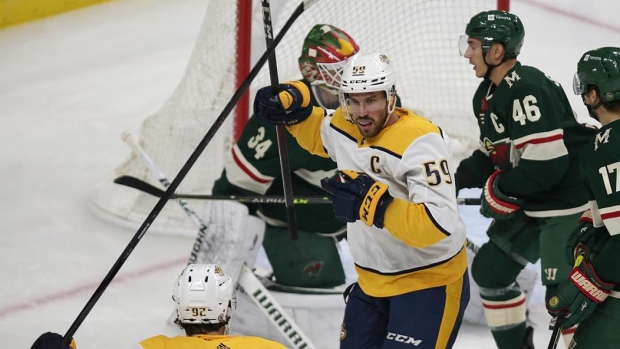 “I thought the games coming in before we had a lot of chances, a lot of good looks, just didn’t score. You can’t get frustrated,” Josi said. “If you create chances, at some point they’re going to go in.”

Nashville has won eight of its last nine games against Minnesota, allowing two or fewer goals in seven of those wins.

The 24-year-old Ingram finished with 33 saves and is the second goaltender in Predators' history to earn a win in his NHL debut, joining Pekka Rinne in 2005.

“I still don’t think it’s hit me a little bit. Ignorance is bliss at this point where you don’t really realize what’s going on yet, but it felt good,” Ingram said. “My first shot in the Western League, my first shot in the American League both went in, so I was kind of half-expecting it to go in today, but it didn’t so that’s a nice way to start.”

Nick Bjugstad and Nico Sturm scored for Minnesota, which was looking to open the season with five straight victories for the first time since 2007-08.

For the fifth straight game, Minnesota allowed the game’s opening goal. Although this time it was the first two goals as the Predators recorded a pair of power-play goals in the first six minutes — and three goals in the opening period.

A shot from the point hit Duchene in traffic, and Josi knocked in the loose puck. Johansen converted on a rebound just over two minutes later after Kaapo Kahkonen couldn’t handle his initial redirect of a shot from Forsberg.

Both goals came with a man advantage, a situation in which Nashville finished 2 for 6, its second straight game with two power-play goals. Minnesota was 0 for 5 on the power play.

“Special teams is a big factor in the games, and obviously power play has been a big factor in the last couple of games. Penalty kill was huge today, 5 on 6 was big. I just really liked the performance of the team, I think it was one where it was a 60-minute effort,” Nashville coach John Hynes said.

In his first start of the season, Kahkonen stopped 24 shots.

Johansen waited a split-second before snapping a low shot past Kahkonen at 12:25 for a 3-0 lead. Josi recorded an assist and is the only defenseman in the league to have three points in a period this season.

Bjugstad converted an outlet pass off the boards from Jon Merrill to get Minnesota within 3-1 midway through the second, before Forsberg deflected in a slap shot from the blue line by Josi less than two minutes later to restore a three-goal lead.

Jeannot batted the puck out of midair past Kahkonen with 85 seconds left in the second period for a 5-1 lead. Sturm scored on a rebound in the waning seconds of the period.

NOTES: Josi has 13 career games with three or more points. The only Predators defenseman to record more is Shea Weber with 15. … Nashville RW Eeli Tolvanen left the game in the first period with an upper-body injury after being hit by Jared Spurgeon, who was penalized for boarding. The team will provide an update Tuesday.