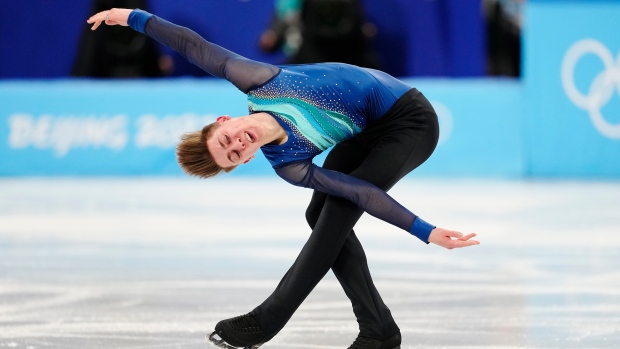 BEIJING — With Keegan Messing half a world away, the clock on his Olympic dream ticking down, Roman Sadovsky learned Thursday night he'd be stepping in to skate for Canada in the team event in Beijing.

Sadovsky, a 22-year-old from Toronto, had a shaky skate in the short program where's there no room for error.

And the rebuilding Canadian figure skating team — the reigning gold medallists in the team event — sit sixth at the Beijing Olympics and in danger of being eliminated.

"I was told to just stay ready, be prepared," Sadovsky said on being in limbo for the last few days. "All season I've been working toward the Olympic Games. I know the Games have a team event. It’s a little bit of an endurance kind of weekend after all the programs. I came here prepared to do anything, really."

Sadovsky was eighth in the men's singles, both underrotating and two-footing the landing on his quadruple Salchow.

Piper Gilles and Paul Poirier in ice dance, and pairs skaters Kirsten Moore-Towers and Michael Marinaro weren't flawless either, but did enough to pull Canada up to sixth.

Madeline Schizas, will make her Olympic debut in the women's singles of the team event on Sunday, and if Canada's not in the top five, they're eliminated before skating the free programs.

Messing, who lives in Girdwood, AK., tested positive for COVID-19 in Vancouver. He then needed to produce four negative tests before being permitted to travel to Beijing. He had two negative tests on Friday, and Skate Canada was hopeful he'd test positive twice more in time to board a flight Saturday to arrive in time for the men's singles event which begins Tuesday.

"The biggest challenge … is trying to get him on a plane to get here. It's not easy to get here," said Mike Slipchuk, Skate Canada's high performance director.

Getting here hasn't been easy for anyone.

The explosion of the Omicron variant in recent weeks had skaters on pins and needles they'd be clear to travel.

"Part of it was just trying not to catch COVID while we were at home and still training and trying to prepare," Poirier said. "(Now) we can just focus on our skate, which is nice."

Messing has been in a Vancouver airport hotel since testing positive. The hotel provided him a security guard, and he ran up and down the hotel stairwell to keep fit. He's been given private ice time to practise the past few days.

His presence has been missed in Beijing.

"We're heartbroken," said Moore-Towers. "We hope he can get here. I’ve been in communication with him every day. Just recently he sent me a video of his son Wyatt standing up. I think he's in good spirits. I think the best person to deal with this kind of crisis is Keegan Messing."

"We definitely miss him but he's handling it 100 times better than any other member would have on Team Canada," Marinaro added.

"Than we would," Moore-Towers said.

Messing and Skate Canada had hoped he'd clear testing in time for the team event, but Sadovsky, who finished runner-up behind Messing at the Canadian championships last month, got the official nod Thursday night.

"With him, it was the worst kept secret because we only had one physical man on site," Slipchuk said.

Sadovsky lost major points on his botched quad, which he calls "a comfort jump for me," en route to scoring 71.06 points. He earned 4.3 for the downgraded jump, while American Nathan Chen, scored 11.0.

"Kind of disappointing honestly," Sadovsky said. "There was just a slight mishap on the takeoff that didn’t allow me to pull in."

Gilles, from Toronto, and Poirier, from Unionville, Ont., gave the Canadians some needed points after finishing fourth in ice dance. Dressed in neon orange — she in a bejewelled dress, he in a bare-chested disco-style one-piece — and skating to Elton John's "I Guess That's Why They Call It the Blues," they scored 82.72.

Moore-Towers of St. Catharines, Ont., and Marinaro of Sarnia, Ont., were fifth in the pairs short event with 67.34 points. Skating to Forest Blakk's "Hold on Tight," Moore-Towers stumbled on their side-by-side triple toe loops.

"I'm bummed about the little mental slip-up there," she said.

The U.S. led the way in the overall standings after the first three events with 28 out of a possible 30 points, followed by the Russian team (26) and China (21). The U.S. finished first in the men's short and rhythm ice dance and third in the pairs short.

In the ice dance, Madison Hubbell and Zachary Donahue of the U.S., finished first with 86.56 points, followed by Russians Victoria Sinitsina and Nikita Katsalapov at 85.05 and Charlene Guignard and Marco Fabbri of Italy at 83.83.

In pairs, Sui Wenjing and Han Cong of China were first with 82.83 points, followed by Russians Aleksandr Galliamov and Anastasia Mishina (82.64) and Americans Brandon Frazier and Alexa Knierim (75.00).

Because crowds are limited at the Games, only about 300 fans were permitted in the Capital Indoor Stadium on Friday. They sat evenly spaced in every other seat, resembling a checkerboard. They clapped politely, as cheering isn't permitted.

The teams have their own rinkside booths to cheer on teammates, and rather than await scores in the traditional "kiss and cry" area, skaters rejoin their teammates when they've skated.

If Canada is one of the five countries to advance to the free programs, Vanessa James and Eric Radford will replace Moore-Towers and Marinaro in the pairs, since substitutions are permitted.

The team event — which features one entry per country in each of the four disciplines — was added to the Olympic program in 2014 in Sochi, where Canada captured silver.

This report by The Canadian Press was first published Feb. 4, 2022.