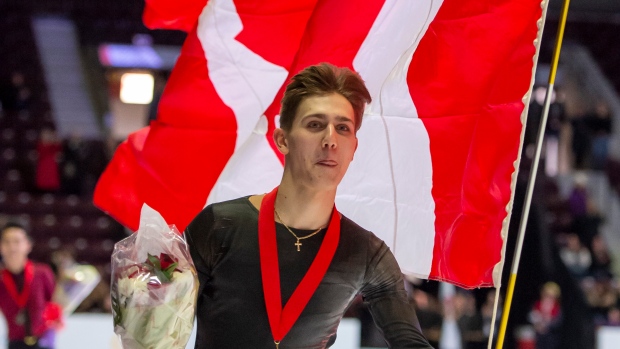 MISSISSAUGA, Ont. — The battle for Canada's lone berth in men's singles at the world figure skating championship was destined to be a dogfight.

But the toughest part for Roman Sadovsky on Saturday night was watching the skaters that took the ice after him.

The 20-year-old from Toronto won his first Canadian figure skating title, setting the standard with two clean quadruple jumps and a score of 260.57.

Then Sadovsky sat nervously and watched as pressure got the better of both Keegan Messing and Nam Nguyen. They both fell twice.

"When you're skating it's one kind of stress level, but you're sort of in control of what you're doing, but once you're sitting down you have no control and you're just watching and it's not a good feeling," Sadovsky said. "It's sort of bittersweet because you want to place well but at the same you want to see your friends compete well."

Canada has just one men's spot at the world championships in Montreal based on last year's results. The spot was playing out as a battle between good friends Messing and Nguyen. But Sadovsky, who'd captured a bronze on the Grand Prix circuit in the fall, never counted himself out.

"I put the pressure on myself, I definitely wanted it really badly, I've been thinking about it since last worlds when I found out we only had one spot," Sadovsky said. "I'm still sort of in disbelief, I've always wanted to get a national title, not just in senior but anywhere.

"To win my first national title at senior is fine, I like it."

Nguyen, a former world junior champion, opened with a beautiful quad toeloop, but fizzled from that point on. He was second with 243.51 points.

"I just kind of fell apart as the program went on," he said. "I think that's more than a physical thing than a mental thing."

Nguyen said Sadovsky had been training with him at his Richmond Hill, Ont., rink once a week, and "I've been seeing his progress, he's come a long way for sure, he's such a beautiful skater to watch."

Messing, the leader after the short program, wound up third with 241.79.

"That one (world) spot had a big shadow over me at this competiton," Messing said. "After the warmup, I was standing back here, and I felt myself slowly slipping away. I just kept telling myself 'No, you're going to fight, you're going to keep pushing.' I guess I just wasn't 100 per cent."

In ice dance, Gilles and Poirier had stood on the national figure skating podium seven times, but never on the top step.

But Saturday, after nearly a decade of skating in the large shadow of superstars Tessa Virtue and Scott Moir, they captured gold.

"It's obviously something that we've worked really hard to get and it hasn't come easily," said Gilles. "But I think everything is about timing in life . . . we're just both really proud of ourselves."

Skating to Joni Mitchell's "Both Sides Now" — they chose a Canadian artist because the world championships are in Montreal — Gilles and Poirier scored 136.76 for their free dance, for a total score of 225.62, a Canadian record. While the scoring system has changed meaning scores aren't truly comparable to those prior to the 2018-19 season, the duo was thrilled.

"It's really big," said Poirier, a native of Unionville, Ont.

"It's huge," echoed Gilles, who was born in Illinois but calls Toronto home. "One judge gave us all 10s (for the component scores). All 10s!"

Gilles and Poirier, who are both 28, had five national silver medals, and two bronze. However the retirement of Virtue and Moir (who was in the audience Saturday), and the absence of Kaitlyn Weaver and Andrew Poje, who are taking the season off and could also retire, left a huge door open.

"This season and especially this competition for us has really been about seizing the opportunity that we had a really good shot at winning this event, and really making a big statement," Poirier said. "It was ours for the taking and we really had to embrace it. . . performing as if we are champions."

Their victory comes a day after they had a major wardrobe malfunction in Friday's short dance. Gilles was looping under Poirier's arm when the top of her braided crown of hair got caught for several seconds in a button on his shirt.

No such troubles Saturday. Dressed in caramel-coloured costumes covered in tiny mirrors, they skated a virtually flawless performance, bringing the Paramount Fine Foods Centre crowd to its feet.

After their fifth-place finish at last month's World Cup Final, they went back to the drawing board to "figure out the little bits that were killing the momentum of the piece," Poirier said.

"I think we've opened up a few little bits of the program that I think has allowed us to skate with more freedom, and more abandon and more speed, which I think are things that leave a strong impression with judges and with the audience as well, just to be able to see the power behind everything," he said.

Moore-Towers, from St. Catharines, Ont., and Marinaro, from Sarnia, Ont., handily won gold with a score 215.67, their only obvious error coming on their opening jump sequence — Moore-Towers singled their triple salchow.

"I was proud of the recovery," Moore-Towers said.

Two months out of the world championships in Montreal, the two said it was key to lay down a strong skate here.

"Our goal here was obviously to solidify ourselves as the No. 1 Canadian team and we're thrilled to have done that in a year when the competition is a little steeper," Moore-Towers said.

"We were a little bit slow and tight out there today," Marinaro added. "Obviously on the world stage we're going to have to bring a bigger skate and bigger performance than we did today, but we're headed there."

The error-filled women's singles event saw three first-time medallists stand on the podium. All three are still eligible to skate at the world junior championships.

Bausback, a 17-year-old from Vancouver, landed five triple jumps en route to scoring 175.54 points. Alison Schumacher of Toronto was second with 168.94, while Madeline Schizas of Okaville, Ont., scored 168.07 for bronze.

"Sort of at the back of my mind I was thinking I could have this in my pocket if I delivered," Bausback said. "My goal was to end on the podium, so this was definitely a surprise, but it's awesome."

World bronze medallist Gabrielle Daleman, who has been sidelined for much of the fall with a concussion and then an ankle injury, had a disastrous free program, falling four times to drop to eighth place.

The women's field has suffered both from the retirement of world champion Kaetlyn Osmond and Daleman's long list of injuries. Kaiya Ruiter, a 13-year-old from Calgary, would have narrowly missed the gold medal Saturday with the 174.83 she scored to win the junior national title earlier in the week.

This report by The Canadian Press was first published Jan. 18, 2020.