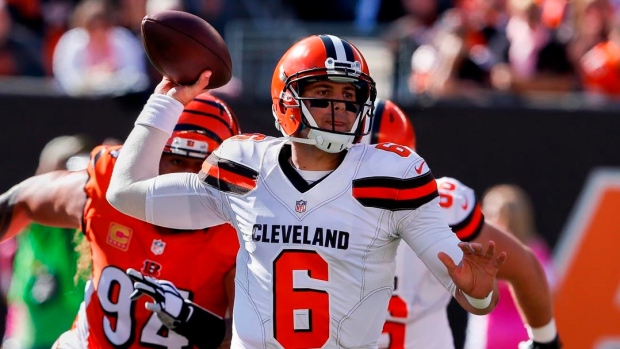 CLEVELAND — Rookie quarterback Cody Kessler will be the Browns' starter this week and the foreseeable future.

How long that is could be up to him.

Kessler, who returned to practice a few days ago after being sidelined since Oct. 23 with a concussion, will start Sunday as the winless Browns (0-8) host the Dallas Cowboys. Kessler has shown steady progress and Browns coach Hue Jackson wants to find out if he can be Cleveland's long-term QB.

"That is why he is playing," Jackson said Friday. "Because I need to know."

Jackson is going back to Kessler after starting Josh McCown last week in a loss to the New York Jets. McCown had a solid game, but at 37, he's not going to help the Browns beyond the next few weeks and Jackson must get a longer look at Kessler.

The Browns have two first-round picks in next year's draft, and the way they're headed they may have No. 1 overall. But before they reach the off-season, they have to figure out if Kessler can be the answer to their nearly two-decades-long search for a franchise quarterback.

"I don't want to just say if he does great that doesn't mean that we're not going to draft a quarterback because I think you've got to always have quarterbacks," Jackson said. "You've got to keep taking shots until you have the guy that you feel is going to do what you need done. But you need to know what's on your team, and the more I'm around guys, the more that I see them in different situations and play under duress and stress and pressure, the more I'm going to know about them.

Kessler, who has made five starts, suffered a concussion late in the first half two weeks ago at Cincinnati. He was cleared through the NFL's head injury protocol earlier this week and practiced for the first time on Wednesday. He's eager to start again but isn't looking beyond the Cowboys.

"Whatever happens moving forward, I just prepare the same way and approach it as an opportunity because you never know how many you are going to get," he said. "My process and my preparation has been that and to prepare as the starter every week. To get another chance, another opportunity this weekend is exciting for me, and I am just going to continue to take it the same way and treat it the same way."

Kessler will match up on Sunday against Dallas rookie Dak Prescott. The two young QBs have been friends for a few years after attending quarterbacks camps together. While Prescott is enjoying success and on a team leading its division, Kessler is stuck with the Browns, who are rebuilding and face a long road ahead to contention.

"I love it here," he said. "There is nowhere else I would rather be. I love that, the underdog mentality. ... As a competitor that is what you want. You want a challenge. You want something that is not given to you, but you have to work for. This team has been through a lot, and it is awesome to be a part of it. This front office and the coaching staff and the players and guys in this locker room have been great to me and the other rookies."

Kessler, who has completed 89 of 133 passes for 947 yards and four touchdowns, will have a new target this week as rookie Corey Coleman will return after missing six games with a broken hand.