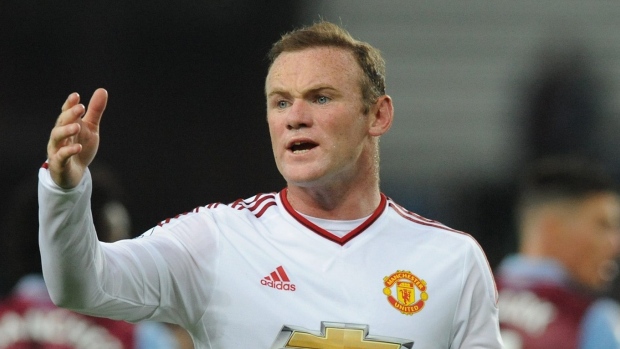 MANCHESTER, England - Manchester United will want more than just a first-leg lead from its Champions League playoff against Bruges on Tuesday.

A goal from Wayne Rooney would be very welcome, too.

Rooney's form is the main concern in an otherwise solid start to the season from United, which has won both of its opening games in the Premier League by 1-0 scorelines.

The England captain, who played out of position in midfield for chunks of last season, is United's No. 1 striker now following the off-season departures of Robin van Persie and Radamel Falcao. However, Rooney hasn't scored in the last eight games for his club and has only attempted one shot from open play this season.

Against Aston Villa on Friday, Rooney only touched the ball once in the penalty area all game.

"All the media has writtenfor one yearthat I have to put him in the striker's position," United manager Louis van Gaal said Monday, "so it's amazing that after two games you're doubting your own opinions. I cannot understand that. I have always confidence in my players."

Rooney should be given another chance to end his barren streak when Bruges visits Old Trafford for what might be the biggest mismatch of the 10 playoff matches. Each winning side over two legs enters the group stage starting next month, which will earn those clubs 12 million euros ($13.1 million) just for advancing — as well as 2 million euros for winning the playoff.

Bruges was the Belgian league's runner-up last season and is in third place after four games of the new season. It was a European Cup runner-up to Liverpool in 1978 and a Europa League quarterfinalist last season.

Seeking to return to the main draw of the Champions League after a year's absence, United should prove to be too much for the Belgian visitors.

"We have had a better start than last year and also two clean sheets," Van Gaal said. "That says about our structure and balance, so I have confidence that we will develop ourselves to a much higher level."

The Dutch coach will want to see more from his attack, with Netherlands forward Memphis Depay yet to justify his billing as potentially the next Cristiano Ronaldo at Old Trafford. It may only be when Rooney finds his form that Depay will prosper.

There are five first-leg matches both on Tuesday and Wednesday. Here are some things to know about them:

New Valencia owner Peter Lim invested heavily last season with the goal of returning the club to the Champions League.

Now the Spanish club must get past Monaco to reach the lucrative group phase, and it may do so without its best defender.

Argentina centre back Nicolas Otamendi reportedly did not train on Sunday, amid speculation he is about to join English side Manchester City.

Monaco will also be without a key player. Midfielder Joao Moutinho, Otamendi's former teammate at FC Porto, will miss the match with a right ankle injury.

Valencia has yet to start its domestic league campaign this season, unlike Monaco.

Kazakhstan and Albania are looking to secure representation in the group stage of the Champions League for the first time.

FC Astana of Kazakhstan is in the competition for the first time and takes on APOEL Nicosia of Cyprus on Tuesday. APOEL went on its own fairy tale run in 2012, reaching the quarterfinals.

Skenderbeu, the first Albanian side to reach the playoffs, will meet Dinamo Zagreb of Croatia on Wednesday.

German side Bayer Leverkusen will come up against a familiar opponent in its playoff against Lazio.

Germany striker Miroslav Klose is starting his fifth season with the Italian side after switching from Bayern Munich in 2011. The World Cup winner won two league titles in four seasons at Bayern after three prolific years at Werder Bremen.

It could be the last season for the 37-year-old striker, who is determined to help Lazio reach Europe's premier competition after an eight-year absence.

Tuesday's other games are: BATE Borisov vs. Partizan Belgrade; and Sporting Lisbon vs. CSKA Moscow.

On Wednesday, it's: Celtic vs. Malmo; FC Basel vs. Maccabi Tel Aviv; and Rapid Vienna vs. Shakhtar Donetsk.