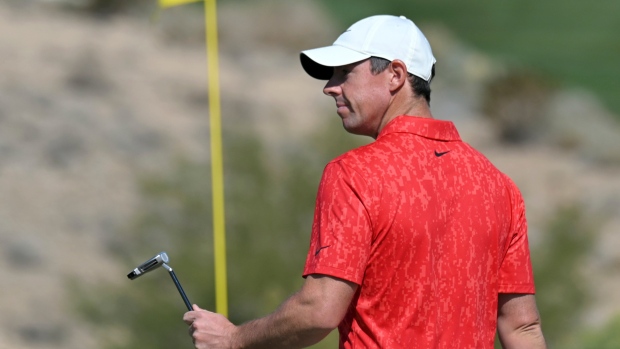 DUBAI, United Arab Emirates (AP) — Rory McIlroy is back playing his best golf again, even if it has come too late to win another Race to Dubai title.

Fresh off his 20th career victory on the PGA Tour, the former No. 1 opened birdie-eagle and shot 7-under 65 Thursday for a two-stroke lead after the first round at DP World Tour Championship, the season-ending event on the European Tour.

McIlroy wasn’t one of the six players who arrived at Jumeirah Golf Estates still with a chance of finishing the season as European No. 1. Collin Morikawa, the leader of the Race to Dubai, is looking good for that title after opening with a 68.

McIlroy has an eye on bigger prizes, like a first major since 2014.

“Getting into contention in one major this year isn’t good enough for me — I’ve done way better than that before and I know I can again, especially with how I am playing,” the four-time major winner said. “I’m feeling like I’ve got my golf game back, basically.”

Since the Ryder Cup in September, the eighth-ranked McIlroy has been looking to rediscover the creativity in his game that made him stand out earlier in his career. He showed signs of it in winning the CJ Cup in Las Vegas last month in his last tournament.

There was more evidence on the Earth Course on Thursday, like his hard draw with a fairway wood from 267 yards at the par-5 No. 2 that set up an eagle putt he holed from 13 feet.

And at the last, where he flopped a pitch from the front of the green to within 4 feet, and rolled in the putt for a sixth birdie of his round.

“I’ve always been a very visual player, always seen shots,” said McIlroy, who won the Race to Dubai title in 2012, ’14 and ’15. “People probably see me playing shots again, maybe not quite as much as Bubba Watson, but that’s how I’ve always played golf and seen the game. I just needed to get back to seeing it like that again.”

Morikawa is looking to become the first player from the United States to be the European No. 1 and started the tournament with a narrow lead over another American, Billy Horschel, in the Race to Dubai standings.

They played together in the final group Thursday. While Horschel only made his first birdie at the 17th hole — he celebrated it rather sarcastically, to laughs from the gallery — in a 2-over 74, Morikawa gained four shots in his first seven holes on the back of his renowned iron play.

Morikawa, the British Open champion, played the final 11 holes in even par, though, after bogeys at Nos. 9 and 17, and was in a 10-way tie for fifth place.

The only players above him were McIlroy and three who shared second place after rounds of 67 — Tapio Pulkkanen, Christiaan Bezuidenhout and Joachim B. Hansen, the winner of last week's Dubai Championship.

With top-ranked Jon Rahm — third in the Race to Dubai standings — having withdrawn from the season-ending tournament citing the demands of a long season, Tyrrell Hatton, Min Woo Lee, Matt Fitzpatrick and Paul Casey are the only other players in with a chance to beat Morikawa and Horschel to the title.

They all need to win and for Morikawa to drop off the leaderboard.