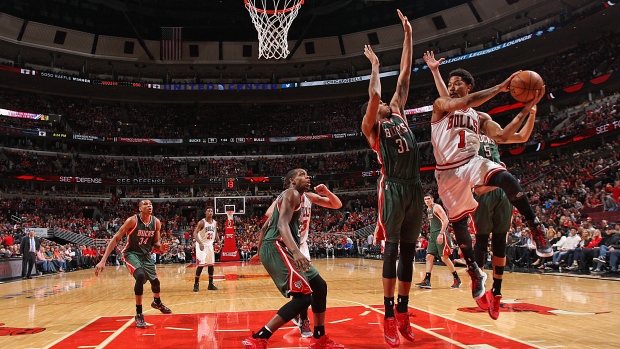 CHICAGO - Through three long years of knee surgeries and recoveries, the Chicago Bulls waited for this. And when the moment arrived, here is what Derrick Rose did.

He attacked. He played like an MVP, and if he keeps it up, the Bulls will be a tough team to knock out.

Rose had 23 points and seven assists in his first post-season game in three years, Jimmy Butler scored 25 points, and Chicago opened the playoffs with a 103-91 victory over the Milwaukee Bucks on Saturday night.

Rose was at his fearless best, driving hard to the rim early and mixing in three 3-pointers in the second half. He shot 9 of 16 and got serenaded with "MVP! MVP!" chants.

It was quite a night for a superstar point guard making his first playoff appearance since he tore a knee ligament in the 2012 playoff opener against Philadelphia. But if he had any thoughts about the long gap between playoff games, he kept them to himself.

"You can't think that way when you're on the floor and you're in a battle," Rose said. "When you step on the floor, all those thoughts have to be in the back of your mind. You have to have a clear mind. You've got to be very confident and believe in the work that you put in to get back on the floor. That's all the things I was working on.

"I only had three goals tonight — to have fun, to have no expectations and to compete."

Khris Middleton scored 18 points and Zaza Pachulia had 15. Michael Carter-Williams finished with nine on 4-of-13 shooting, and the sixth-seeded Bucks came up short after jumping from 15 wins to 41 this season.

"It's the first playoff game for a lot of people on this team," guard Jerryd Bayless said. "There were a lot of nerves and whatnot, but we got rid of it today and have a great opportunity on Monday."

Butler showed the form that made him an All-Star for the first time this season. He set a playoff career high for points and had six assists.

Aaron Brooks provided a spark off the bench with 13 points, and the Bulls opened the series on a winning note after fighting through injuries to finish 50-32.

The Bulls believe they are poised to make a run now that they finally have Rose playing in the post-season. The last time they had him for the duration of the playoffs, he capped an MVP season by leading them to the Eastern Conference finals in 2011. Chicago lost to Miami, and what happened after that is well documented.

The Bulls earned the No. 1 seed for the second straight year in 2012, only to have Rose tear his ACL late in a lopsided playoff-opening win over Philadelphia. A torn meniscus in his right knee early last season cut short his comeback after he sat out a year.

Without him, the Bulls were a playoff team. But they were never a serious championship threat.

Now, they're off to a good start.

Chicago took a 60-51 lead to the locker room after getting 17 points from Butler and 12 from Rose.

The star point guard headed to the sideline to a loud ovation with 1:37 left after throwing down a hard two-handed off a feed from Butler in transition and then scoring on a neat reverse layup that brought the bench to its feet.

The Bucks pulled within three early in the third, but Rose hit three 3-pointers during a 15-7 response, including one that made it 77-66 with 4:33 left in the quarter.

"(Rose) is a special player," Noah said. "It was special to watch him play like that. He was having a lot of fun out there on the court."

Bucks: Had he stayed healthy, this would have been quite a homecoming for Jabari Parker. Instead, the Chicago product is recovering from a knee injury that ended his rookie season. "He's here with us for the playoff experience mentally, being able to go through different film sessions, and also being able to be on the floor with his teammates, being able to pass to do different drills is good for him mentally and physically," coach Jason Kidd said.

Bulls: Including the regular season, Chicago has won five straight overall and eight in a row at the United Center.

Bulls F Taj Gibson strained his right knee in the fourth quarter. He has also been bothered by a strained left shoulder the past few weeks. ... G Kirk Hinrich (left knee) sat out after missing the final two regular-season games.