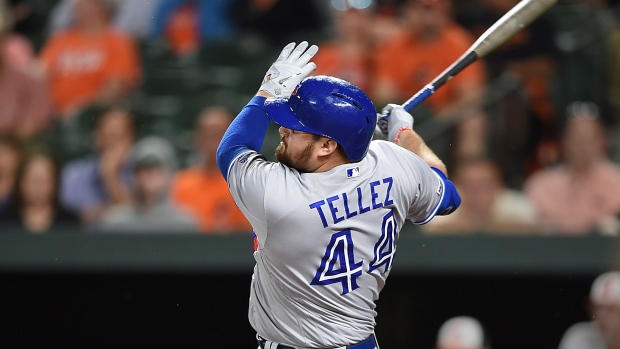 TORONTO — Rowdy Tellez didn't need much time to figure out what was different with his swing after being sent down to triple-A Buffalo last month.

Tellez, who was recalled by the Toronto Blue Jays Tuesday ahead of their home game against the Texas Rangers, dissected his swing with Buffao Bisons hitting coach Corey Hart the day he was sent down.

The two reached a conclusion instantly — he was hunching slightly in his stance.

Tellez was demoted July 15 after seeing his batting average dip into the low .200s in the six weeks before that.

He said he felt the change immediately in Buffalo, where batted .366 through his 26-game stint with the Bisons, with seven homers, nine doubles and 21 runs batted in.

"It felt like I went back to normal," Tellez said. "I was kinda searching the last month here and when I got down there it was like 'OK, this is where I need to be,' so it was a good time to be down there and Corey helped me out a ton, Meach (Bisons manager Bobby Meacham) was great, really helped get me back on track."

Blue Jays manager Charlie Montoyo said he intends to play Tellez as much as possible. With veteran infielder Freddy Galvis claimed off waivers by Cincinnati on Monday, there's even more room in the lineup for Tellez to DH as Montoyo shuffles his players' time on the field.

"I want to see something better than what he was doing ... getting better at bats, better approach at the plate, work hard on his defence, and he was doing that in triple-A," Montoyo said of his expectations for Tellez.

"He did a good job when he went down there. He worked hard on his approach."

Right-handed pitcher Brock Stewart was optioned to Buffalo in the corresponding roster move that allowed Tellez to join a Blue Jays team that has won 10 of its last 15 games.

"We have a lot of young guys here, a good core group, and I'm just going to do my best to fit in and keep this going, what they've got going on right now," Tellez said. "The Blue Jays are playing really well so I'm excited to be here."