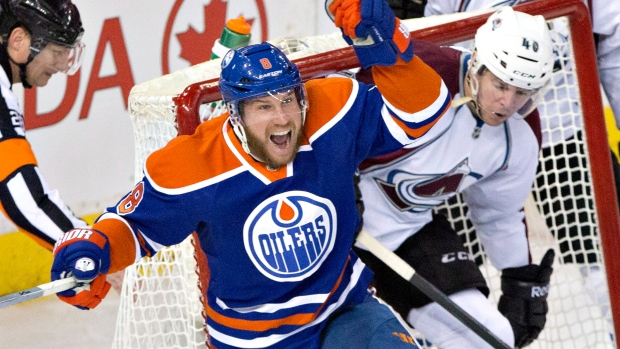 EDMONTON - The Edmonton Oilers made Wednesday's victory a lot harder than it had to be.

Derek Roy scored the winner as the Oilers dealt the Colorado Avalanche's faint playoff hopes another blow, hanging on for a 4-3 victory after almost blowing an early 3-0 lead.

"I think we let off the gas, which is not something we want to do in the future, but our lines did a good job battling," Roy said. "(Ben Scrivens) did a good job tonight between the pipes for us."

Martin Marincin, Jordan Eberle and Taylor Hall also scored for the Oilers (21-40-13), who have won two of their last three games.

Jarome Iginla, Alex Tanguay and Ryan O'Reilly replied for the Avalanche (33-28-12), who have lost three in a row and are 10 points out of a playoff spot with just nine games remaining.

"We needed these points and it is disappointing not to get them," said Colorado defenceman Nick Holden. "It was a big game for us to stay up in the standings. Not getting those points is killer. We sill have nine games left and you never know. We need to keep pushing right to the end and hopefully we get some luck."

Avalanche captain Gabriel Landeskog said no team can expect to win after spotting the opposition a 3-0 lead.

"That's not the start we want to have in a game, it doesn't matter who we are playing.," he said. "That's just not good enough."

Edmonton took a 1-0 lead four-and-a half minutes into the first as Marincin crept in from the point and beat Colorado goalie Semyon Varlamov with a blast from the top of the circle. It was Marincin's first career NHL goal and Oilers forward Andrew Miller picked up his first career point on the play.

Just 1:20 later, the Oilers extended their lead to two goals as Eberle dove to swat in a loose puck at the side of the net for his 21st of the season.

The Oilers made it 3-0 before the midway point of the first period as Hall sent a wrist shot through Varlamov's legs. Varlamov was pulled in favour of backup goalie Reto Berra after allowing three goals on seven shots.

Colorado got a goal back five minutes into the third on the power play as Iginla stepped into a shot and blew it past Scrivens.

The Avs made it 3-2 midway through the second period as Tanguay rushed to bang in a big rebound for his 21st goal.

Colorado tied it up five minutes into the third as Tanguay picked off a giveaway by Justin Schultz and passed it to O'Reilly, who put the puck into a wide-open net.

The Oilers regained the lead on the power play with nine minutes left in the third as Roy was able to dig a puck out from behind Berra during a scramble and sweep it into the net.

"We got off to a good start and they battled back," said Oilers head coach Todd Nelson. "It was nice to get that power-play goal. They kept on coming and Benny made some huge saves for us down the stretch."

Scrivens made 41 saves for the win.

Colorado concludes a five-game road trip on Thursday in Vancouver. Edmonton warps up a six-game homestand on Friday against the Dallas Stars.

Notes: Edmonton, which lost Andrew Ference (concussion) and Boyd Gordon (back) the previous game, played the bulk of the game without defenceman Mark Fayne (shoulder) and then lost forward Matt Hendricks (back) after the second period.