Button: Sens have the potential for a franchise-defining draft

The rubber will meet the road on the Ottawa Senators’ rebuild on Friday night, just off the New Jersey Turnpike in the NHL Network studios where the 2020 Draft Lottery will be conducted.

It’s a potentially franchise-changing moment – no matter which way the ping-pong balls settle.

Best-case scenario: The Sens win the lottery twice and the right to select consensus pick Alexis Lafreniere and their pick of the litter at No. 2. That is just a four per cent shot.

Worst-case scenario: One of the eight play-in teams ranked eighth to 15th climbs up into the top three – which has happened each of the last three lotteries – and the Sens’ two picks fall to fifth and sixth overall. That is a 15 per cent shot.

Either way, the Senators – thanks to the Erik Karlsson trade – are guaranteed to become the first NHL team to pick twice in the top six since the New York Islanders selected Rick DiPietro and Raffi Torres in 2000.

“They can’t lose, at least not in my opinion,” says Craig Button, TSN’s Director of Scouting. “Remember how disappointed everyone in Colorado and Vancouver felt in 2017 when they fell in the lottery? They ended up with Cale Makar and Elias Pettersson at four and five.”

In his view, after dozens of live viewings of each available player, the drop-off from Lafreniere to Quinton Byfield, Tim Stutzle, Cole Perfetti, Lucas Raymond or Marco Rossi in the rankings “isn’t all that significant.”

“I have no doubt in my mind that Alexis Lafreniere is the best player, but he isn’t Sidney Crosby or Connor McDavid,” Button said. “I don’t care if the Ottawa Senators make their two picks out of a hat – wherever they land in the lottery – because they’re going to be getting high-quality, front-line players.”

Ottawa has roughly a 50 per cent chance to pick inside the top two and an approximate 75 per cent shot to grab one of the first, second or third selections.

With the COVID-19 pandemic putting a pause on the NHL season in March, the 2020 Draft Lottery will be conducted in a slightly different fashion. The league’s general managers will not be sequestered on-site, only available to join the show virtually. NHL commissioner Gary Bettman and deputy commissioner Bill Daly will oversee the process, which is administered and audited by the independent accounting firm Ernst & Young.

The best indication of whether the Senators fell – and one of the eight play-in teams won a top-three pick – is whether Daly begins announcing the order of selection with the seventh or eighth overall pick. If it’s eight, it means a play-in team beat the odds and a second lottery will need to be conducted at a later date.

In the event of a second lottery, each of the eight teams that lose in the play-in round will have an equal 12.5-per-cent chance at the available pick or picks. That means it will not be weighted on regular season standing.

In other words, if one of those eight wins the No. 1 overall pick, entire fan bases could be rooting for their team to lose the best-of-five series to get into the Stanley Cup playoffs.

The drama would be incredible. In that case, dropping three games in August would give a team roughly the same chance as a 30th-place finisher in a regular 82-game season.

But that isn’t the focus of the Senators - who will not factor into the sweepstakes for a third time since their other first-round selection is lottery protected by the New York Islanders from the Jean-Gabriel Pageau trade. The highest the Senators’ third pick could be is 13th.

This is Ottawa’s first year with three first-round picks since 2011, when they selected Mika Zibanejad (No. 6) and missed on Stefan Noesen (No. 21) and Matt Puempel (No. 24); current GM Pierre Dorion was the Sens’ director of player personnel then.

Friday night is about who the Senators can add to one of the NHL’s stacked prospect cupboards, one that includes a young core led by Brady Tkachuk and Thomas Chabot.

Button is projecting seven prospects have the potential to be top-six forwards or top-four defencemen, led by Drake Batherson and AHL rookie of the year Josh Norris. 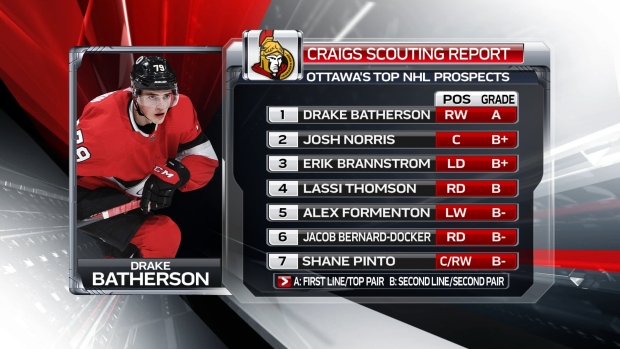 The Senators are bordering on an embarrassment of riches, a pool of prospects so deep that the franchise struggled to recruit college free agents this spring because there are seemingly limited windows of opportunity at each position.

That’s why Button believes the Sens are well down the path back toward the playoffs.

“I think they are two years away,” Button said. “Not yet next season because their defence is too young. There is no way to speed that up with [Erik] Brannstrom and JBD [Jacob Bernard-Docker]. But I see them in the playoffs in 2021-22 and they have a chance to be really good in 2022-23.”

Landing Lafreniere, with the immediate ability to add 60 points at the NHL level next season, would undoubtedly help the cause. But even Lafreniere likely wouldn’t be able to lift the Sens into contention for a playoff spot as soon as next season.

“All of this is dependent on getting a really good goaltender, whether it’s from within or outside the organization,” Button said. “That’s what the Senators really need.”

Massive heavy lifting remains. But Friday night marks the point of building it back up after two seasons' worth of tearing down in the nation's capital.

There is no losing now, no matter how the ping-pong balls bounce.

Because no one – definitely not even Dorion – foresaw the Sharks with a 29th-place finish when Karlsson headed west, giving the Sens another incredible lottery ticket.