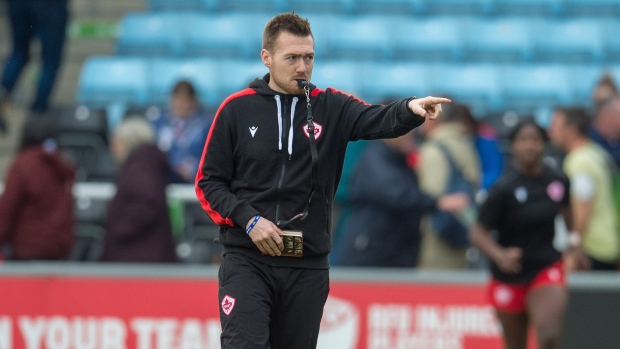 Hanratty was initially appointed interim coach in October for the duration of 2021, leading the team for the two events in Dubai that kicked off the 2022 HSBC World Rugby Sevens Series. At the time, Rugby Canada said it expected to have a permanent coach in place "for when the team returns after the holiday season."

Instead, the governing body said Wednesday that Hanratty's term will be extended for another eight months.

"Jack has done an exceptional job coaching the national senior women’s program over the last four months," Dustin Hopkins, Rugby Canada's managing director of rugby operations, said in a statement. "Jack’s leadership has aided the progress and growth of this young group of athletes."

The Canadian women, in transition after a disappointing ninth-place finish at the Tokyo Olympics, stand eighth in the World Series standings after four events. The next stop on the circuit is April 30 in Langford, B.C.

Hanratty was the fourth coach to lead the Canadian women last year. Australian Mick Byrne coached the team at the Tokyo Olympics and former Canada captain Kelly Russell, assisted by Hanratty, was in charge for September sevens events in Vancouver and Edmonton.

Longtime coach John Tait, who led the Canadian women to bronze at the 2016 Rio Olympics, stepped down last April the wake of a complaint filed by 37 current and former team members.

An independent review concluded that while the conduct described in the complaint reflected the experiences of the athletes, it did not fall within Rugby Canada's policy definition of harassment or bullying. Tait is now technical director of B.C. Rugby.

Hanratty is stepping down as an assistant coach with the women's 15s team. Rugby Canada said a replacement will be announced shortly.

The Irish-born Hanratty was working as a development officer for Leinster Rugby when he came to Canada 10 years ago, initially for seven days to run a course for a rugby club in Halifax. That turned into a sabbatical for the summer.

After returning to Ireland, he interviewed for a job with Rugby Nova Scotia, thinking it might last a year or so. Instead he found a home in Canada and is now a citizen.

Hanratty has also been head coach of the Canadian under-20 15s squad and a coach with the Rugby Canada academy in Halifax. He has served in an advisory role to the Canadian Sports Centre (CSC) Atlantic and Rugby Nova Scotia.

This report by The Canadian Press was first published Feb. 16, 2022