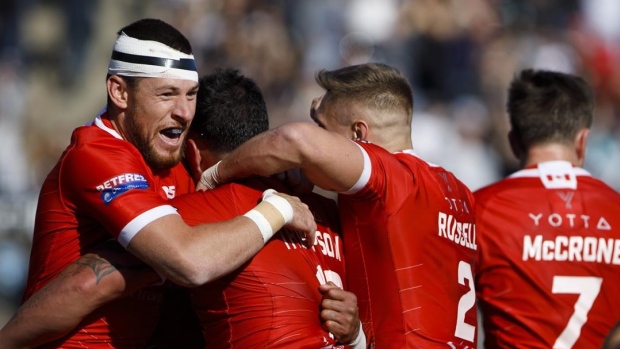 Rugby League Cares, the official charity of the Rugby Football League, has set up a fund for Toronto Wolfpack players suffering because of the transatlantic team's collapse.

The fund will award grants to help players deal with financial difficulties.

Wolfpack players and staff have not been paid since June 10. The club stood down July 20, saying it could not afford to play the remainder of the Super League pandemic-interrupted season.

Toronto's subsequent bid to win reinstatement for 2021 under new ownership was rejected.

“Due to circumstances entirely out of their control, many of the Toronto players are now finding it difficult to pay their bills," Chris Rostron, head of Rugby League Cares, said in a statement.

“Some of them were on very modest salaries: six months without pay and no access to the U.K. government furlough scheme has been incredibly tough. We have been providing practical support to the players over recent months, including debt management advice and access to counselling services.

“Our welfare team has spent the last 10 days working with the players to identify those who are suffering most hardship: thanks to the support of the RFL and Super League we are now in a position to begin making payments to those in most need."

Because the team is Canadian-owned, players and staff in England have been unable to take advantage of many U.K. government support programs.

A dozen or so players have found other clubs, either on loan or permanently. Some signed for lesser deals. Others have had to take jobs outside their sport to pay the bills.

Wolfpack chairman and CEO Bob Hunter confirmed the earlier 1,000-pound ($1,735) payments. He said the Wolfpack pushed for the financial help with the first coming from a bond of some 30,000 pounds ($52,095) the transatlantic team had put up in the past.

Majority owner David Argyle, who could no longer fund the club, has stepped away from the franchise.

Argyle, a Toronto-based Australian entrepreneur who specializes in mining and natural resources in emerging markets, has offered a personal guarantee for the player pay but has not been in a position to make good on it. He has said the original ownership group poured $30 million into the franchise.

This report by The Canadian Press was first published Dec. 1, 2020