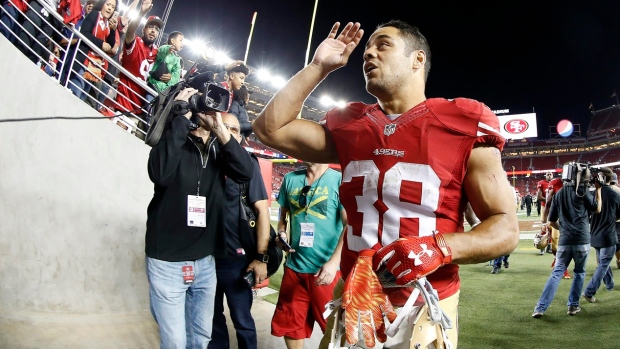 BRISBANE, Australia - The Jarryd Hayne bandwagon Down Under just got a little more crowded.

The former National Rugby League star tweeted he made the 53-man roster for the San Francisco 49ers early Sunday, Australia time, ending an against-the-odds transition since leaving the Parramatta Eels last year to chase his dream of playing in the NFL.

The Sydney Morning Herald said Hayne "completed one of the greatest code-switches in sporting history."

Under a section of the newspaper called "Hayne Mania," the Sunday Telegraph in Sydney said Hayne, 27, was sightseeing with his mother Jodie and two sisters in San Francisco when told he'd made the cut.

Australian Broadcasting Corporation radio said Hayne had gone from "curiosity to star" in a matter of weeks in the United States, while news of him making the cut was among the leading items on news and sports reports and morning breakfast shows on Sunday.

"(hashtag)49ers" was trending on Twitter in Australia, and among the congratulatory notes Fox Sports News wrote, "We Have Takeoff."

The 49ers said: "Welcome aboard mate," while the NFL said: "Congrats" with the hashtag "HaynePlaneHeretoStay."

Later, the hashtag "HaynePlane" began trending. Manly-Warringah Sea Eagles, one of the teams Hayne played against during his NRL career, tweeted "an incredible athlete and what a story, best wishes from all at Manly."

Hayne has been used as a punt returner, running back, and even a receiver on occasion, impressing his teammates.

"It's been really fun to watch. Right off the bat you notice how well he can catch a ball," veteran placekicker Phil Dawson said. "Catching a punt is probably one of the toughest skills in the NFL, and he's just stepped right in and looks like a natural."

During a 49ers conference call, Hayne took time to thank the people back home.

"I don't think words really describe how great it is to see so many people support me, all the Aussies," Hayne said. "Australia is such a sporting country that we're very proud of where we're from. To see so many people get behind me and everyone over here in America obviously just having fun and chasing dreams, I can't begin to thank them. And I thank everyone back home for their love of sport."