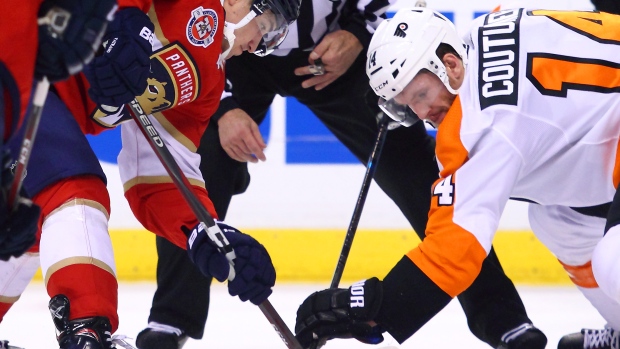 The National Hockey League, like most every pro sports league, is a copycat enterprise. Any slight or even perceived advantage will be replicated.

The Toronto Maple Leafs dabbled on Saturday night in a faceoff trend that the Philadelphia Flyers executed so well over the past two seasons.

The idea is simple: the centre taking the draw will always be a forward on his dominant hand (usually his backhand) – even if he regularly plays as a winger.

On Saturday, the Leafs rotated between Fredrik Gauthier (left-shooting) and Jason Spezza (right-shooting) on their strong sides of the ice. The Flyers have garnered attention over the past two years going back and forth between Sean Couturier (left) and Claude Giroux (right), with Giroux assuming traditional duties on the wing once the play resumes.

It’s the same dynamic Mike Babcock has used in previous seasons when Auston Matthews (left) and William Nylander (right) are playing on the same line.

Coach Dave Hakstol was the one who made the change in Philadelphia and Hakstol is now an assistant under Babcock in Toronto.

The Flyers led the NHL in faceoff win percentage last year at 54.7 per cent, a whole 1.7 per cent higher than the second- place team, the Maple Leafs. That's a significant margin, with the rest of the NHL bunched so close together.

It’s a trend that may garner more attention this season given the NHL’s rule change that will allow teams to choose which side of the ice they want to take the faceoff on at the start of power plays and following an icing.

A few players admittedly weren’t aware of the rule change earlier this month at the NHL Player Media Tour in Chicago. But Kings centre and two-time Selke Trophy winner Anze Kopitar said that the changes are going to have a “big” impact.

“Faceoffs are very important to begin with,” Kopitar said. “Now having the chance to pick your side is going to be huge. I think everyone is going to have more set plays based on your chance to pick. It’s an easier game when you have the puck – you don’t have to chase it.”

Couturier predicted that the new rules will “for sure bring a few more goals per year.”

It’s just that it might not make as big of a difference for the Flyers, because they’ve have been dealing from a position of strength no matter which side the faceoff was on previously.

“We split the draws, but some other teams don’t have that luxury of having a lot of centremen that are good at faceoffs,” Couturier said.

With Couturier exclusively taking faceoffs on his strong side, he won draws at a career-best 57.1 per cent clip last year. His career average in his previous seven NHL seasons was just 49.4 per cent.

Giroux has experienced a similar bump. Since moving to the “wing,” each of his last two seasons has been north of 58 per cent, putting him in the class of the NHL’s elite faceoff winners. His career average prior to the switch was 54.4 per cent. He is also taking roughly half the number of draws he was before.

None of the 20 or so players polled at the Media Tour knew or could hazard a guess as to what their faceoff splits would be comparing strong side to weak side.

“I have no clue,” Conn Smythe Trophy winner Ryan O’Reilly said. “I don’t have a preference. For us, it will be more of a matchup and who we’re going against.”

“I think for everyone the difference would be pretty big,” new Flyers centre Kevin Hayes said.

A member of one NHL team’s analytics staff projected that teams can expect to win somewhere between three to six per cent more of the faceoffs on their player’s strong side, but he cautioned that the overall win percentage in a game will not be drastically different because the ability to choose your faceoff spot is limited to only two scenarios.

Nonetheless, the wins that do happen in those circumstances could become critical in terms of deciding the outcome of a game.

“If you don’t win the faceoff to start a power play, you can lose almost 30 seconds of power play time,” Couturier said.

There will be math on the fly for coaches, who will likely have the matchup numbers at their disposal on the bench. The home team will have final say, of course, with a line change – unless it is after an icing when they won’t have any choice but to keep their current players on the ice.

“It’s probably going to be a little bit more [work] for the coaches and video [staff] and stuff like that,” Sidney Crosby said. “I think there’s a lot that goes into it. I think it’s important for the power play team just as much for the team that’s killing. You’ve got to be aware of different scenarios and what teams will be looking to do.”

In the case of icings, the goal invariably will be for coaches to choose a side where the opposing centre will be on his weak side. Then it will depend on who is taking it.

“If you’re going against a guy like [Patrice] Bergeron, I’m not sure it’s going to matter what side you get him on,” Couturier said.

Couturier, now 26 with already 578 regular-season games under his belt, said he’s definitely gotten more comfortable taking faceoffs in the NHL. Part of it, he said, is just getting stronger – and part of it is experience.

“I’m more confident in the dot for sure,” Couturier said. “Any veteran will tell you, the more years you play, the more loose you get in the dot, and the refs let you cheat a little more. I think that helps as well.”

Couturier’s comfort has also been aided by the fact that he is almost always entering the circle with an edge on his strong side – a trend which will no doubt be copied by more teams.