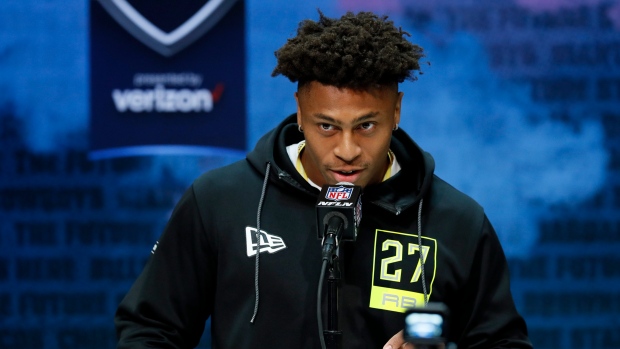 INDIANAPOLIS – They paraded this year’s NFL Combine running back class before the media on Wednesday, a star-studded group of athletes headlined by Wisconsin’s Jonathan Taylor, Ohio State’s J.K. Dobbins and Geogia’s D’Andre Swift.

But it won’t be a surprise if none of those players hear their names called during the first day of the NFL Draft on April 23rd in Las Vegas. Running backs have become the NFL’s most disposable commodities.

At one time, they were the stars, the workhorses who carried the load week-in and week-out. NFL teams drafted them high, paid them handsomely and built their offences around them.

No more. There have been just nine running backs selected in the first round of the NFL Draft over the past five years. A year ago there was just one and many mock drafts for this year’s first-round selections have none.

NFL teams have adopted the attitude that running backs are plentiful, there’s very little separating all but the absolute elite ones from the rest and, like a new car coming off the lot, their value diminishes the more they are driven. As such, most NFL teams employ multiple backs in a game, thus diminishing the value of any single running back, a phenomenon of which the prospects at this year’s combine are well aware.

“I think more times now you’re getting more running backs that are able to share workloads,” said Arizona State’s Eno Benjamin. “So you rotate two or three running backs nowadays and I feel like they feel like there’s no need to pay them, so to each their own and that’s probably all I could say about that.”

“I’m of two minds on it .... I’ve always received the bulk of the share of carries but I don’t mind being in a rotation system where you’re able to save your body and play more years.”

Twenty year ago, there were nine NFL running backs who averaged at least 20 carries per game. Ten years ago, that number had fallen to four. Last season, only Tennessee’s Derrick Henry hit that number.

The trend is unmistakable.

The only running back taken in the first round last season, Las Vegas’s Josh Jacobs, ranked tied for third in carries per game last NFL season but missed three of the final four games of the regular season due to injury.

All of the running backs in this year’s class seem to understand that the days of being drafted and then carrying the ball 25 times a game are over. These days they try to build their value on versatility, which means not just the ability to catch the ball out of the backfield, but contributing on special teams or lining up as a slot receiver.

“Doing multiple things … running the ball, catching the ball, moving around,” said TCU's Sewo Olonilua  “I feel like I can line up in the slot and run routes, catch passes. I think that brings more value, doing other things, versatility.”

The NFL is trending towards position-less players on defence and it seems running backs are trending in that direction as well.

“They say the game is evolving with the running back being flexed-out and the linebacker covering him,” said Olonilua's TCU’s teammate, Jet Anderson.”I love that style. ”

The new model for the modern NFL running back are players such as New York Giant Saquan Barkley, who just happens to be the highest drafted running back of the past 13 years, going second overall in 2018, or Carolina’s Christian McCaffrey, selected eighth overall in 2017.

Barkley has had 143 receptions in his two NFL seasons, nearly one third the number of carries he's had. McCaffrey’s 303 receptions through his first three seasons are nearly half as many as his total carries over that span.

Developing that versatility is something that should help the NFL draft stock of this past season’s NCAA rushing leader, Oklahoma State's Chuba Hubbard, who opted to return to school for a fourth season. (He redshirted his first season.)

The Sherwood Park, Alta., native carried the ball 328 times for 2,094 yards and a 6.4 yards per carry average to go with 21 touchdowns last season. However, he caught just 23 passes last season for the Cowboys.

Hubbard has elite speed but doesn’t carry the bulk of the NFL’s highest volume backs, so developing more ability as a receiver would help give him the versatility teams are requiring in all but the exceptional bruising backs, such as Tennessee’s Henry.

“I feel like it’s very big because you can’t just be one dimensional in this game,” said Florida’s La’Mical Perine. “You have to be a guy who can do everything.”