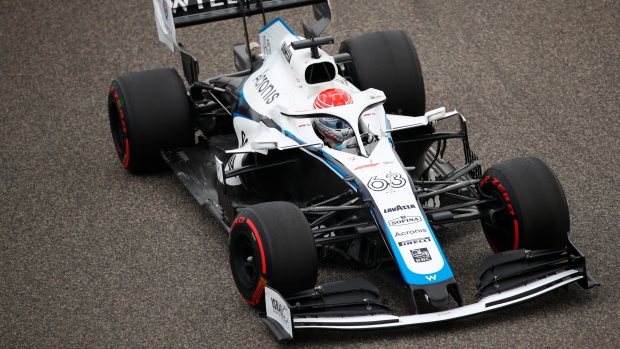 George Russell has been touted as the future of Formula One by Lewis Hamilton, and has the opportunity to showcase his talent when he replaces the seven-time champion at Sunday's Sakhir Grand Prix.

Mercedes gave him the seat after Hamilton tested positive for COVID-19 on Monday. Hamilton, who has already clinched the season-long championship, is self-isolating for 10 days and could also miss the year's final race in Abu Dhabi the following weekend.

“It means a huge amount to me that Mercedes gave me this opportunity, a lot of effort went into making this deal happen,” Russell said at a news conference Thursday. “I’m not putting any additional pressure on myself. No targets (set) or expectations from Mercedes.”

Russell was told by Mercedes' head of motorsport Toto Wolff that he was replacing Hamilton in rather unusual circumstances.

“I got a phone call from Toto at 2 a.m. I was in the bathroom, which was slightly awkward,” Russell said. “Toto told me ‘We want you to drive.’ Obviously a bit of a sleepless night. I had 64 phone calls on Tuesday.”

Another awkward factor for Russell is that he has bigger feet than Hamilton and so has to squeeze his toes into size 10 racing boots rather than his usual size 11s.

Two weeks ago, Hamilton heaped praise on the 22-year-old Russell, whose failure to score a point in 36 career races so far is more related to driving an uncompetitive Williams than a lack of ability.

“He really is the future,” Hamilton said. “I have no doubt that he has the potential to be a future champion.”

He has shown glimpses of his potential speed in beating teammates Nicholas Latifi and Robert Kubica 36-0 in qualifying over this season and last.

Highly rated at Mercedes having come through its junior program, Russell was reportedly under consideration to replace Valtteri Bottas this season. But Williams would not release him.

Russell's move creates added pressure on Bottas, who has again been dominated by Hamilton this season and is fighting to hold off Red Bull's Max Verstappen for second in the championship.

The Finnish driver, prone to making mistakes under pressure, trails Hamilton by 131 points and leads Verstappen by only 12 — even though Verstappen has a slower car.

Now he faces the grim prospect of being beaten by someone who has never raced in a Mercedes F1 car.

“If he beats me, for sure it wouldn’t look so good,” Bottas said Thursday.

There will be a new face at the race as Pietro Fittipaldi replaces the recovering Romain Grosjean, who somehow escaped with only minor burns when his Haas car exploded into a fireball after crashing on the first lap at last weekend's Bahrain GP.

Although Grosjean was mentally impacted by the incident, he is optimistic about his chances of racing in Abu Dhabi GP. But that decision will be made in consultation with the FIA's medical team.

Grosjean recounted how he was trapped inside the flaming cockpit, twice failing to get out and thinking he was going to die.

“I sat back down and there came a strange moment when I saw death as close as you can see it,” Grosjean said. “I was wondering which part of me was going to burn first and if it would hurt. I'd taken 53 G (of impact) so obviously I was groggy.”

Four-time F1 champion Sebastian Vettel came to visit him at the hospital, and they discussed safety issues. Meanwhile, F1's governing body FIA is investigating the incident.

Grosjean visited the paddock on Thursday and greeted well-wishers there.

His replacement is the 24-year-old grandson of two-time F1 champion Emerson Fittipaldi, who was promoted from his role as Haas' reserve driver.

Drivers will again race at the Bahrain International Circuit in Sakhir, but on a smaller outer track of 3.5 kilometres (2.2 miles) instead of 5.4 (3.3 miles), and with 87 laps rather than 54.