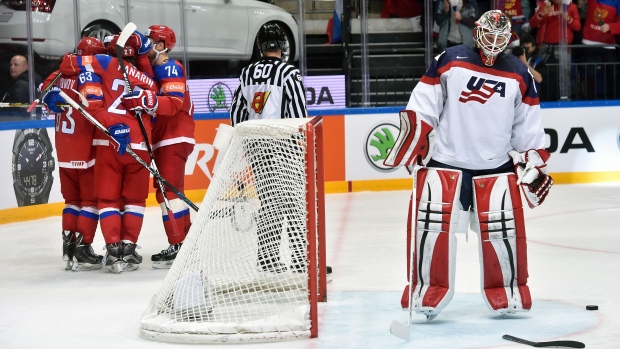 MOSCOW - Russia routed the United States 7-2 to win the bronze medal at the ice hockey world championship on Sunday.

Ahead of the final between Canada and Finland later Sunday, Russia was in full control of the bronze medal game, taking a 4-0 lead in the second period before countering any hopes of an American fightback.

Artemi Panarin, who finished with a goal and two assists, said Russia had played with more freedom after a weight of expectation was lifted following its semifinal defeat to Finland on Saturday.

Frank Vatrano scored both goals for the U.S.

"This one stings. Obviously, you don't like to go out on a losing note," forward Nick Foligno said. "They just played off their emotion and their power and we didn't really have an answer."

Bronze is still a disappointment for a Russian team that had hoped to reach the gold medal game on home ice.

"We can't win (the world championship) every year. In the last three years we have been champions, second place," forward Alex Ovechkin said. "It's better to win a medal than not."

The young U.S. team, featuring six college players, missed out on the chance to win bronze for the third time in four years.