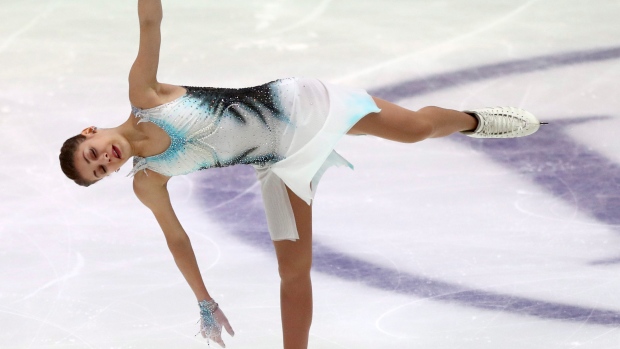 GRAZ, Austria — Russia is set to sweep the women's event at the European figure skating championships on Friday, after dominating the pairs.

Alena Kostornaia took the women's lead with 84.92 points after the short program, with Anna Shcherbakova second on 77.95 and Alexandra Trusova third on 74.95.

That puts Russia on track to finish 1-2-3 in the women's competition at the European championships for the first time since 2016. The women's free skate is Saturday.

All three of the leading skaters are in their first season of senior competition and share the same coach, Eteri Tutberidze. Kostornaia is unbeaten this season, including a win at the Grand Prix Finals.

Their rise has displaced skaters like Olympic gold medallist Alina Zagitova, who said last month she was taking a sabbatical to find new motivation.

The closest non-Russian challenger is Alexia Paganini of Switzerland in fourth place on 68.82.

In the pairs event, Alexandra Boikova and Dmitry Kozlovsky charged to the gold medal with the best scores in both the short program and free skate for a total of 234.58.

The two-time European champions Evgenia Tarasova and Vladimir Morozov moved up from third to second in the free skate to claim silver with 208.64. Daria Pavliuchenko and Denis Khodykin dropped down from second to third with 206.53 after a fall for Pavliuchenko coming off a throw.