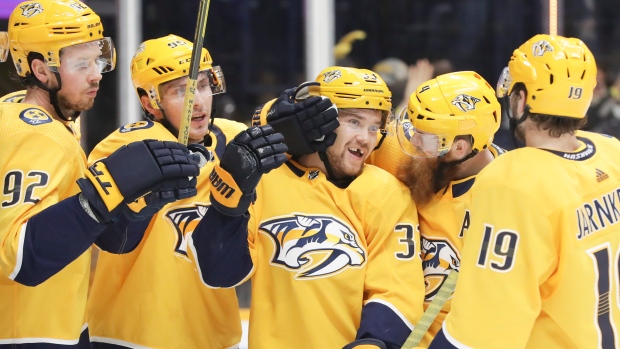 NASHVILLE — Ryan Ellis and Viktor Arvidsson each scored power-play goals in the second period as the Nashville Predators rallied to beat the Ottawa Senators 3-2 on Tuesday night for their second straight win.

Ellis tied it up at 5:17 of the second with his goal, then he had an assist on Arvidsson's power-play goal midway through the period for the best production on the man advantage for the NHL's 27th-ranked team since the first period of the Winter Classic on Jan. 1.

“We moved pucks, kept it simple,” Ellis said. “I think our first power play of the night, we didn’t score, but that unit was out for about two minutes straight and got some good looks and started us on the right path. After that, we got two goals, so it was a big step for us.”

Colin Blackwell also scored as Nashville split the season series with the Senators.

Thomas Chabot and Filip Chlapik each scored for Ottawa. Coach D.J. Smith pulled goalie Craig Anderson with 2:44 left, but Anderson had to return for a faceoff with 30.8 seconds left after the Senators took their timeout. He skated off with about 20 seconds left, but the Senators couldn't force overtime.

“Special teams hurt us tonight," Smith said. “Our penalty kill gave up two, and our power play didn’t score. We played really hard, we finished checks, we had all kinds of chances, their goalie kept them out.”

The Predators have earned at least a point in six of the last seven games. They've now won the first two games of a five-game homestand after struggling in Nashville most of this season. Better yet, the Predators moved up to the second wild card in the Western Conference, tied with Winnipeg and Arizona with at least three games in hand on both.

The Senators played their second game in as many nights after losing 4-3 in overtime Monday night in Columbus and their second since trading away top scorer Jean-Gabriel Pageau to the New York Islanders. They did get right wing Bobby Ryan back for his first game after missing 42 games in the joint NHL/NHL Players Association assistance program Nov. 20 to deal with an alcohol problem.

Ottawa opened the game quickly with Chabot scoring at 4:16 after going to the penalty box for high-sticking Craig Smith within the first minute. Nashville tied it up 20 seconds later when Blackwell scored from the right edge of the crease. But the Senators outshot Nashville 17-9 in the first, and Chlapik scored off a rebound of a shot by Rudolfs Balcers late in the period for a 2-1 lead.

“Obviously, I got a lot of ice time and I tried to take advantage of that,” said Chabot, who played a game-high 32 minutes, 15 seconds. “We lost some big leadership in the trade deadline, so it’s our job as young guys to kind of step it up and make the other players follow us and I think the last two games we’ve done that.”

Ellis beat Anderson with a wrister from the top of the left circle, tying it at 2 in the second. The Senators had a chance to take the lead when Chris Tierney put the puck over the net on a short-handed breakaway. Arvidsson responded within a minute, scoring at 9:43 to put Nashville up 3-2 by batting the puck in after it bounced off his legs in the crease.

The Predators lost the Winter Classic with Ellis knocked out for 20 games by a hit to the head from Corey Perry. This was the defenceman's third game back and his first goal since returning having to get used to a new coach. John Hynes was hired Jan. 7 while Ellis was out. Hynes said Ellis told him before returning that he'd need a few shifts, maybe a period, to get up to speed.

“And he's been up to speed pretty quick,” Hynes said.

NOTES: The Predators scratched goalie Pekka Rinne (illness) and recalled goalie Connor Ingram from AHL Milwaukee on an emergency basis. ... Blackwell now has a three-game point streak, the first of his career with a goal and two assists. ... Nashville improved to 8-17-4 when allowing the first goal. ... Nashville improved to 19-2-3 when leading after two periods. ... Ottawa is 4-5-3 this season in the second of back-to-back games.