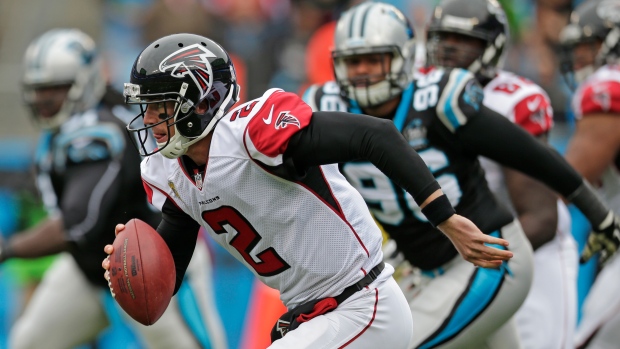 CHARLOTTE, N.C. - Matt Ryan is as surprised as anyone that the Atlanta Falcons are tied for first in the NFC South with a 4-6 record.

"It's been a different year, for sure," Ryan said. "You play to be relevant in November and December. As quirky as this season's been, we're relevant."

Ryan threw for 268 yards and a touchdown, Matt Bryant added four field goals and the Falcons held off a late rally by the Carolina Panthers to win 19-17 on Sunday.

The Falcons moved into a tie with New Orleans for the division lead after the Saints lost at home to Cincinnati 27-10.

"The way our season is going, we're happy to have any win," Falcons defensive tackle Corey Peters said.

Newton overcame two early interceptions and threw for 292 yards, but it wasn't enough for the Panthers, who have lost five straight and are 1-7-1 since starting the season 2-0. It'd be easy to say the Panthers are done, yet they still control their playoff destiny.

"Well, somebody is trying to give us a gift," Panthers cornerback Josh Norman said of the Saints' loss. "The craziest part about it all is we're still in it."

The Panthers trailed 16-3 in the fourth quarter before a sluggish Newton started to heat up.

But Ryan moved the Falcons into field goal range, completing three passes for 29 yards to Harry Douglas to set up Bryant's clutch kick.

"I try to simplify things as much as I can," Bryant said.

He often jokes that it's like the golf movie "Happy Gilmore": "I try to go to a happy place."

"Everything's working out," he added, "so I'll keep doing what I'm doing."

Newton still had something left, moving Carolina to the Atlanta 29. Gano then hooked the potential game-winner from 46 yards out wide left.

The Panthers forced a punt and moved into Atlanta territory behind a pair of hook-and-ladder plays to set up a desperation try for Gano. But his kick was low and blocked by rookie Ra'Shede Hagemen as time expired.

"I have to pull through and make the kick," Gano said. "That's what it comes down to. No excuses. I'm not going to sit here and explain why I missed the kick. My job is to put it through the uprights."

Roddy White, who had eight catches for 75 yards, caught a 4-yard TD pass from Ryan to give the Falcons a 16-3 lead.

Things got heated after that.

Devin Hester was flagged for unsportsmanlike conduct after knocking a Carolina player off the pile at the end of a play, igniting a lot of pushing and shoving. Two snaps later, Carolina's Thomas Davis stripped Hester and Luke Kuechly recovered, starting another brief altercation with Jacquizz Rodgers taking down Kuechly, although no flag was thrown.

The day started off rough for Newton.

After he was sacked nine times in Carolina's 45-21 loss to the Philadelphia Eagles on Monday night, defensive Tyler Jackson raced in unblocked and delivered a helmet-to-helmet hit on the quarterback on Carolina's first play from scrimmage. Jackson was flagged for a 15-yard penalty, but Newton got up holding his chin.

Newton didn't seem sharp until late in the game, but the two-time Pro Bowler said the hit didn't affect him.

NOTES: Benjamin finished with 109 yards receiving for the Panthers. ... The Falcons are 4-0 in the division, beating Tampa Bay twice and Carolina and New Orleans once each.