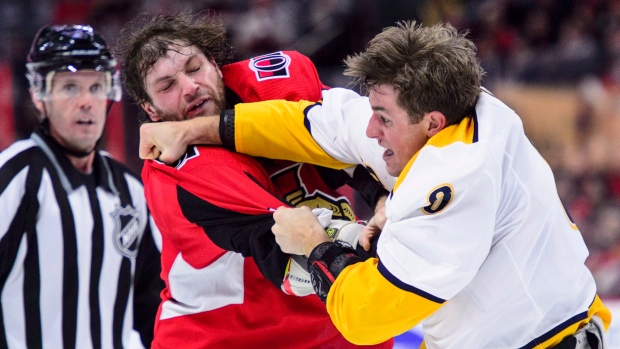 A day after dropping the gloves with Kyle Turris, Bobby Ryan felt like tossing a few playful jabs when asked about the fight with his old teammate.

When asked about television cameras catching the two stars jawing at each other from the penalty box after their second-period fight, Ryan said he and Turris were simply exchanging holiday pleasantries.

“It was Christmas greetings. I asked what the kids and wife are doing. He asked the same of me,” joked Ryan. “No – it was just continuing the emotion of the fight.”

Ottawa fans have seen fights involving a Senators player and an ex-teammate in the past. The Chris Neil-Zdeno Chara tilt from the 2011-2012 campaign is the one that comes to mind the most in this market. But those two were NHL heavyweights when they squared off, while the Ryan-Turris bout on Monday night featured a pair of skilled forwards who had each fought six times in their respective NHL careers.

Naturally, many fans felt like there had to be a backstory to this fight involving off-ice dynamics between the players. The two left a lot of room for interpretation on Monday night when Ryan declined to speak to the media and Turris refused to comment.

“It is what it is – and leave it at that,” Turris said when asked about the fight on Monday night. “I’m just not going to talk about it.”

On Tuesday, Ryan tried to pour cold water on the theory that his fight with Turris had anything to do with their relationship away from the rink.

“I had no issues with [Turris]. You’re not always as close with people you play with all the time. I wouldn’t say we were overly close, but we were cordial that’s for sure,” said Ryan. “Never had any issues, so there’s nothing to read into.”

At one point, Ryan was asked if anything was settled between the two ex-teammates on Monday night.

“Not for me or him, no. Nothing needed to be settled,” he said flatly.

But Ryan did seem a little irked that Turris slashed him across the hands in the moments leading up to the fight. Ryan, who has missed significant time in each of the last five seasons with hand or finger injuries, believes Turris shouldn’t have been so careless around his hands.

“I didn’t like the slash. He knows the history, right? He’s been here,” Ryan said. “I felt like he got me right on the finger. So I gave him a whack and he gave me a whack. We just traded back and forth until it became more.”

He was then asked by a reporter if he was surprised that Turris would intentionally target his oft-injured fingers if he was well aware about Ryan’s injury history.

Ryan clarified his remark a few moments later, saying he felt that perhaps Turris was just frustrated that he lost a puck battle with him, which preceded their fight.

And the Sens winger did stop short of accusing Turris of purposely targeting his hands by saying this wasn’t akin to seeing a player purposely take out an opponent with a knee-on-knee hit.

“It’s a weird situation because hands are like the laughingstock – everybody already makes fun of my hands and fingers already, so I’m really used to it,” says Ryan. “So I don’t really correlate it to a major body part like a knee, but it’s kind of a dumb thing to do.”

Ryan, whose most recent fight prior to this one with Turris was a tilt with Kris Russell in March of 2014, said he’d never had the experience of dropping the gloves with an old teammate.

“That’s a first for me – but no it wasn’t weird. You kind of forget who it is when you’re in that moment,” he said.

Ryan just returned to the Sens lineup last week after missing a week with a concussion. But he said his injury history wasn’t on his mind when he decided to drop the gloves with Turris on Monday night.

“You get caught up in what’s going on, the emotion that’s happening and then the adrenaline kicks in. The hands and concussion were the last thing on my mind,” said Ryan. “You can feel that energy in the building. It’s a very cool thing to have people excited about something like that. It’s a different part of the game that I don’t do much, so to feel differently about it was fun.”

Senators’ players were seen tapping their sticks against the boards in approval of Ryan after the fight and the buzz from the fight was still being talked about inside the dressing room on Tuesday.

“Obviously they’re both really good friends of mine,” said Mark Borowiecki. “Those are the kind of fights that, regardless of what side of the fence you sit on fighting-wise, you have to be okay with those ones. It’s an emotional game. It’s a heated game and sometimes it’s going to boil over. It wasn’t staged. It was just two guys going at it.”